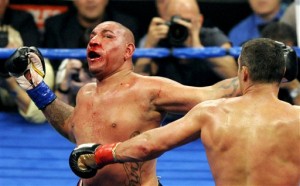 Quick question. What do Ruslan Provodnikov, David Lemieux, and Chris Arreola have in common? Besides the fact that none of them will be world champions, I mean. If you salivated a little at the very mention of their names and said “they’re three guys I watch every time they’re on TV because I’ve almost never seen them in a boring fight”, give yourself a cookie because you catch on quick.

Last night, the Boston Bruins won an exciting (well, not so much if you’re a Canucks fan) Game Seven to win the Stanley Cup in hockey. Last week, the Dallas Mavericks and Miami Heat put on a thrilling six-game series for the basketball championship. Elsewhere in the world, you’ve got teams like the Australian Rules Football Geelong Cats playing an unholy number of thrilling close contests on television. Whenever teams or players in other sports put on thrilling events, people tune in and everybody rolls in the money.

Mind you, team sports have set schedules and (with the exception of the NBA’s use of incompetent refs to influence game outcomes) non-rigged results that make them more of a crapshoot from game to game. But boxing is entirely up to promoters and venue operators and TV networks. Who fights whom is often a matter of answering the question of who the fans want to see. The difference between a great title fight (or even who is a contender) and a bad one is made in a boardroom by Bob Arum, not in the ring by, say, Manny Pacquiao and Floyd Mayweather.

Clearly this needs to change. If I see another Pacquiao-Mosley dull-as-hell mismatch masquerading as “world championship boxing”, I might just eviscerate myself and strangle my still-conscious body with my own intestines. Some of these guys Bob Arum signs and throws at us make me wonder if he’s not just showing up at the 7-Eleven and picking up day laborers after a paycheck. Josh Clottey? Kermit Cintron? A sack of potatoes? And I’m supposed to pay $50 and up to watch that crap?

We need a new way to rank fighters. The guys getting title shots should make sense—or at least they should make money. I’m all in favor of skilled, technical fighters showing off feats of defensive derring-do and dazzling us with speed and quickness like Roy Jones in his prime. But I’m also a hardcore fight fan who appreciates such things. If boxing is to bring in casual fans, the guys who now flock to MMA and line Dana White’s pockets, we need to have the guys they want to see punching each other utterly senseless for ten rounds or twelve rounds or until their brains turn to pudding.

I know, I know. You hardcores want to put me in against Wladimir Klitschko with my hands tied behind my back for even suggesting that boxing do more to endanger the health and welfare of the fighters. But hear me out. This is spectacle (and speculation). And you’re no more inclined to watch dreadful fights like the Julio-Adjaho debacle on FNF a couple of weeks ago than I am. There’s a reason Kenny Galarza got another TV spot before Brad Solomon (who beat him) did. There’s a reason Provodnikov fights on FNF so often. It’s because people want to see the action fighters fight.

So why not design world rankings and a title belt for action fighters? The Fight of the Year Champion, let’s call it. And all the title fights will be contested between guys who throw upwards of a hundred punches a round, whose defense is barely an improvement on Rock-em Sock-em Robots, whose fan base will be the guys who see blood and whoop and holler like fans in the Roman Colosseum. You’re telling me you wouldn’t pay $50 to watch a card headlined by the three guys I mentioned in my opening paragraph?

Hell, after watching them both live on the same card, I’m willing to say we should sanction Arreola vs. Tony Thompson for the inaugural Fight of the Year Heavyweight Championship. Beats the hell out of watching Ukrainian androids pull another Ivan Drago on some unsuspecting sucker. And Provodnikov vs. Kendall Holt would be a better title fight at 140 for our would-be division than the cure-for-insomnia bout we got between Timothy Bradley and Devon Alexander.

Boxing is a business, as promoters are quick to remind us. And if the business of boxing is to grow, we need less Pacquiao vs. tomato can, less Andre Ward-Allen Green, less Joel Julio-Anges Adjaho and more all-action, TV-friendly fighters matched up with each other for a prize that rewards them for having a skill set that brings the money in? Sure, these champs will have Hobbesian careers—nasty, brutish, and short. But that’s just fine for our ADD culture, because it means a ready supply of fresh meat for the gladiator arena.

Go ahead. Tell me you wouldn’t watch that. Thought so.