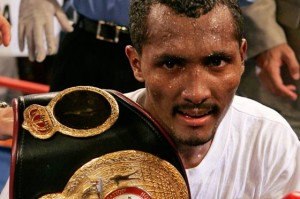 The defending champ was clearly the better fighter and decisively won each round before his challenger ended the bout by refusing to come out for the ninth round.

On the undercard, WBA middleweight title holder, Gennady Golovkin (21-0, 18 KOs) defended his belt against Kassim Ouma (27-8-1, 17 KOs), stopping the former jr. middleweight champion in tenth round of their contest.

Although fairly competitive in the first half of the bout, Golovkin’s pressure eventually began to wear down and bust up the game Ugandan fighter.

After two one-sided rounds and with Ouma suffering from severe swelling of the face and a bad cut inside the mouth, the referee saw fit to stop the contest in the tenth round.

*For the complete recap of the Friday Night Fights card, click HERE