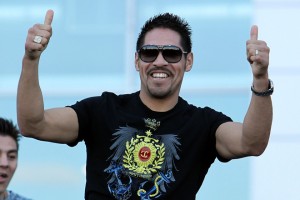 According to first hand, eye witness reports to The Boxing Tribune, Antonio Margarito and former trainer, Javier Capetillo were laughing it up and having a wonderful time at the Miguel Vazquez-Giovani Segura double header in Toluca, Mexico Saturday night.

Inseparable throughout the evening and joking around like nothing had ever happened between the two, Margarito would even enter the squared circle with the outlaw trainer as he brought his fighters, Vazquez and Segura, to the ring. Local television coverage captured some of the playful, mid-ring interaction as both Capetillo and Margarito were all smiles.

Despite a public relations attempt to paint Margarito as angered and hurt over Capetillo’s allegedly unsolicited actions, even declaring an estrangement between the two, their public display of affection at Saturday night’s card clearly shows that there’s not much resentment between the former team at all.