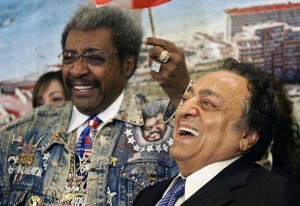 Welcome to the Monday Rant, the only boxing column not afraid to burn bridges and desecrate free media lunches.

This is how boxing works:

Old, seedy men (sanctioning bodies, promoters, managers) make fights and hatch plans amongst themselves…They funnel those plans down to the major media sources that they just happen to subsidize with advertising money and favors….The media passes the crap to the fans.

That’s an over simplification, but it’s basically right on the money. In the end, though, the two groups of people most essential to the sport– the fighters and the fans– invariably end up getting screwed.

For so long now, I’ve come across fans resigned to their fate as perpetual victims. “This is how thing have always been,” they’ll say. “There’s nothing we can do.”

Well, the easiest way to achieve nothing is by giving up. Personally, I have a lot of vices, but defeatism is not one of them.

So, here, at The Boxing Tribune, we’ll be kicking off the initiative to take our sport back from the scumbags, shills, and idiots. There won’t be any “pie in the sky,” unrealistic complete restructuring of the sport. Rather, just a simple set of guidelines and actions we can take as fans to take the power from the abusers by changing how we act and react to what’s happening to the sport we love.

Today, we begin our modest (or maybe not so modest) effort:

Taking Back Our Sport, Part 1:  Rankings

Never trust any so-called boxing expert, analyst, or media voice who dumps on or diminishes the importance of rankings. Imagine any other legit sport adopting the same philosophy:

“Well, forget the standings, I think the Yankees and the Dodgers should be in the World Series.”

It’s shear idiocy to undercut the idea of having a set of standardized rankings. Worse than that, though, it absolutely fosters the kind of corruption and back room shenanigans that have turned boxing from a co-national pastime into a fringe, niche sport.

Fair, neutral rankings keep everyone in check and prevent any sleight of hand from the nefarious figures that plague the sport. They also allow newcomers to jump right in and see what’s what and who’s who. Currently, even hardcore fans have a tough time deciphering the real goings-on in the sport.

But when it comes to rankings, the question is– Who would be qualified to make those comprehensive rankings and how would they be compiled?

We can immediately rule out the ridiculous sanctioning bodies. Ring Magazine is respected by some and regarded as the sport’s most respected rankings, but as a property of Golden Boy and with a history of rankings scandal in the past, they are not a viable alternative. Boxrec’s formula-based rankings are just downright bizarre at times.

For those familiar with our site, they know that we have put a great deal of effort into developing and maintaining our own set of World Rankings, compiled through a unique hybrid human/formula method that, to the best of my knowledge, has never done before. Basically, it’s a  system based on activity and level of opposition within a given weight class and fine tuned through built-in parameters to ensure a realistic set of rankings.

I stand by our rankings as a fair and logical indication of what’s going on in each division, but I would gladly step aside and throw my support behind any other effort that represents a better take on the issue.

Objectivity and independence is the key and I will be discussing the “who, what, and hows” of this issue with those interested parties in our forum and via our Facebook page.

Rankings shouldn’t be about opinions or “gut feelings” any more than baseball or football standings can be compiled on a hunch. They shouldn’t be about what should or could happen– They should be based on what’s actually happening. Removing personal opinion and bias from the equation is one of the recurring themes you’re going to find throughout this Boxing Tribune push for reform.

Before I take pot-shots from cynical fans about this “silly and unrealistic” initiative to take back the sport, let me just point out that none of what I will be laying out has anything to do with the politics of the sport, the current power structure, or the actual in-ring product.

This has to do with us and what we can do as fans of the sport. We are  the voices that have never dared to make ourselves heard…It’s about time that changed, don’t you think?

Alvarez did what any good prospect should be expected to do– he improved. His defense was a bit tighter, he was a little lighter on his feet, and he fought a very mature, educated fight against a solid opponent.

Notice that I called Alvarez a “prospect.” Alvarez, himself, acknowledged that fact during the post-fight interview where he directly stated (but it wasn’t translated by the interpreter), “I’m just beginning.”

Alvarez knows what’s what, but the usual suspects, who automatically go on attack mode against Golden Boy fighters and/or HBO, couldn’t wait to post their pearls of wisdom. These shills, in the pocket of Top Rank and/or other companies, go after those entities that aren’t subsidizing their sites with ad money. It gives them a sense of purpose and allows them to feel as though they are actual journalists.

Of course, they aren’t.

These guys are just monkeys dancing for loose change while the organ grinder plays music. They are “for hire” freelance publicists who would immediately cease any critical analysis if Golden Boy would only buy some ad space on their site.

I’m not defending Golden Boy or HBO. I’ve been critical of them before, and I will surely piss all over them again in the near future. But these guys in the paid-for mainstream boxing media are just so damn transparent– companies that pay their way will get off easy, those that don’t will get buried relentlessly.

You can email Paul at paulmagno@theboxingtribune.com, follow him on Twitter at www.twitter.com/boxing BTBC or check him out as he scowls pensively over a notepad at ringside. Paul is a full member of the Burger King Kid’s Club.