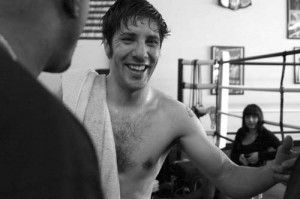 Molina is best known to regular FNF viewers for his battle against “Hammerin’ Hank” Lundy last July, an 11th round stoppage that Molina was losing decisively on the scorecards at the time he hurt his opponent with a left hand and seized the win. For Molina, the TKO attracted attention and thrust him into the spotlight as a lightweight contender.

Frankel is a step down in competition for Molina, having compiled his record largely against club fighters and weak opposition and with no signature win on his resumé. Frankel’s status as a journeyman opponent means that the Covina native will be heavily favored fighting in his own backyard.

In the co-feature, Mauricio Herrera (17-1, 7 KOs) takes on Mike Dallas Jr. (17-1-1, 7 KOs) in what looks to be a matchup as even as the records would indicate. Both men have had significant bouts on FNF in 2011, as Herrera handed Ruslan Provodnikov his first pro loss on January 7, while Dallas took his first pro loss at the hands of Josesito Lopez on January 28. The junior welterweight contest will elevate the winner to fringe contender status while the loser will likely be relegated out of the ranks of the potential titlists in the division.