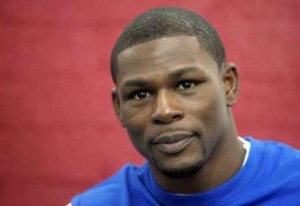 As ESPN’s Dan Rafael reported yesterday, former undisputed middleweight world champion, Jermain Taylor, will be resuming a career that was seemingly ended by two consecutive knockout losses (as well as a 1-4 record over his last five)

When Taylor went down hard, via frightening Arthur Abraham right hook in the spooky sterile ambiance of a German boxing arena, there was little doubt among fans, experts, and even Taylor’s own management team that the star from Little Rock would be wise to call it a career.

But with plenty of time to dwell on a career cut short, Taylor managed to convince himself, as well as former trainer Pat Burns, that he could possibly pick up where he left off before making the ill-advised move up to the super middleweight division.

After a battery of neurological tests, conducted in Little Rock and at the Mayo Clinic, Taylor was given a green light to resume his career and the remnants of Team Taylor, which at this point consists of Burns, adviser, Al Haymon, and a couple of other key figures from better days, are now focused on a return to Taylor’s old 160 lb. territory.

Taylor’s return is tentatively scheduled for an August 13 Showtime TV date in Little Rock, two days after his thirty-third birthday, against an opponent to be named later.

The re-emergence of Taylor has to be considered a godsend by current middleweight top dog, Sergio Martinez, who has the looks, the talent, and the momentum, but no commercially viable opponents. Taylor would represent the biggest possible fight for the Argentine champ and a legit ratings bonanza for HBO.

Another intrigue is whether Lou DiBella, Martinez’s current promoter and former promoter of Taylor, would sign such a fight after he made the conscious effort to resign from Team Taylor in 2009, fearing for the fighter’s safety.

Of course, this is assuming that Taylor even wants to go the route of Kelly Pavlik, Paul Williams, and Serhiy Dzinziruk.

The former undisputed middleweight champ, who ended the Bernard Hopkins stranglehold on the division with two close decision wins in 2005, may decide to travel the path of least resistance by going after one of the four other 160 lb. belt holders: Felix Sturm, Daniel Geale, Dimitry Pirog, or Julio Cesar Chavez Jr.

But before sizing up title shots, Taylor has to get back into the grove and overcome the trauma of three brutal knockouts and four defeats in his last five bouts. Assuming this is a legitimate comeback, Burns, Haymon, and the rest of Team Taylor will want to take their time, working off two years worth of ring rust and rebuilding a career momentum cut brutally short.

But if the doctors are giving him a thumbs up and a premium cable channel is already lining up to get back in the business of Jermain Taylor, then, all that’s left is the fighting.

And the fighting has been Taylor’s biggest problem.