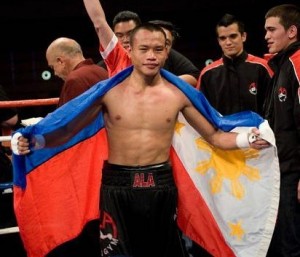 As they say in New Orleans, “Who Dat?” When the tape-delayed telecast of Friday Night Fights kicks off at 11 PM Eastern from San Antonio, Texas (the event will be live at 10 on ESPN Deportes for those who speak Spanish and don’t want to wait for the tennis matches to conclude on ESPN2), fans may well ask that question about a junior middleweight battle between Mark Jason Melligen (21-2, 14 KOs) and Sebastian Andres Lujan (37-5-2, 23 KOs) in the main event.

Lujan has been in with the better competition between the two fighters, including a win over a badly faded Jose Luis Castillo in 2008, well past the point where Castillo was in world-champion form. Lujan has also fought for a world title at junior middleweight, finding himself the loser in a wide unanimous decision against Sergey Dzinziruk in 2006. He should pose a challenge for Melligen, who is moving up from welterweight and whose most significant win was a unanimous decision over journeyman Anges Adjaho in Reno last year. The Filipino fighter will be looking to determine whether he is ready for a potential push for a title in the weak 154 pound division and fighting someone in Lujan who has fought for a world title will either answer those questions in the affirmative or relegate Melligen to opponent status for other up-and-comers.

Meanwhile, the co-feature matches Cleveland based Mickey Bey Jr. (16-0-1, 8 KOs) against Alejandro Rodriguez (12-3, 6 KOs) in a fight that is nearly guaranteed to go the distance. Bey’s eight knockouts came against the kinds of guys who step into boxing rings because for them it is a faster and more cost-effective way to kill brain cells than simply to take up drinking vodka straight from the bottle. Rodriguez has been knocked out once, but it was by a guy with legitimate power in both hands, namely John Molina, who was last seen giving the Ginsu treatment to Rob Frankel on FNF last week. Rodriguez has fought twice outside Mexico; both times he has lost. For Mickey Bey, this should be another soft opponent to build his record.

Fox Doucette covers Friday Night Fights for The Boxing Tribune. He also writes The Southpaw, which appears on Thursdays. Fan mail, hate mail, and job offers to guard hen houses can be sent to beatcap@gmail.com.