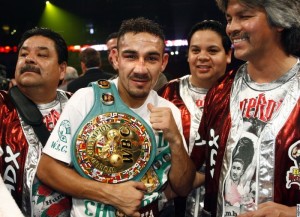 Soto informed the media about the move after his eleven round technical decision win against Motoki Sasaki on Saturday, June 25, but he made it official via written statement to the WBC earlier this week:

“I have nothing more than gratitude to the WBC, as this sanctioning body is where I spent practically my entire career and I’ve been a world champion at featherweight, super featherweight and lightweight. I’ve always proudly wore the green and gold belt. Now it’s time to take another step in my career and find new goals. My staff will review the options and they will determine what is best.”

Soto won the vacant WBC 135 lb. belt against David Diaz in March, 2010 and made four successful defenses before vacating.