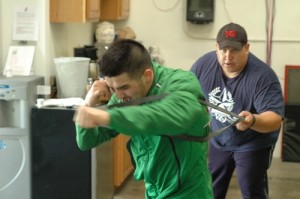 Tucked away in a tidy industrial complex in Westlake Village, CA, lightweight titleholder Brandon Rios sits on a decline bench. In both hands he holds a medicine ball, both arms fully extended as his new strength and conditioning coach, Henry Castro tries to push him back down.

“Right now we’re done with the hard stuff,” Castro says, both hands on the ball as he leans his weight hard into it, “we’re on target now, this is like a jog, the easy stuff, just keeping him on target for weight and keeping his strength where it is now.” Castro pushes even harder and Rios holds his own. This is no easy task, as Castro is probably around 290lbs. Sweat pours off of Rios’s brow as he eggs on his trainer, “Come on! Come on!” Apparently this is how they jog out an 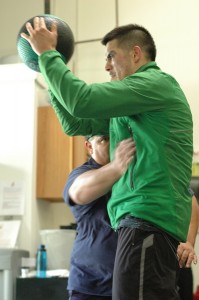 This working relationship started about four weeks earlier and is a success so far. “I love working with him,” says Castro, “he’s just work.”

Later on, Rios sits on a spinning bike gripping a small medicine ball and punching as he pedals. “This is my first time working with a strength and conditioning coach. Before I never wanted to work with one because I like to do my training old school, in the gym.” Castro increases the resistance on the bike and Rios stands up to pedal hard.

“This is a hard drill right here. Four weeks ago I had [Brandon] doing this with a 10lb vest on and 5lb ankle weights on each leg. Now look at him.” Castro checks his stopwatch, releases the resistance and Rios sits back down, pedaling and punching.

Is this any different than what Brandon Rios does anyway?

“My sparring is done already,” Rios says, running on a treadmill, “I did seventeen straight rounds two weeks ago, that’s the first time I ever did that. But now I’m done with my sparring and I’m calming down everything.” Rios doesn’t break stride as he shakes hands with one of the gym members, they exchange greetings and he continues, “before, at this point before a fight I’d have been tired already, I’m very grouchy, don’t like to talk. The diet, the weight loss, I’m just not a good person to be around. But with Henry and the gym work, I’m feeling strong and look at me, I’m feeling good.”

Now, a week before the fight, TheBoxingTribune called Rios at his house. He seemed calm, and in good spirits.

“Honestly I can’t wait for this fight. I’ve been telling my trainer that I’ve wanted a war. Antillon said that I’ve never been tested, so good, let him be my test. I just hope he comes to fight, man, because I just want to fight, right there, toe to toe. This is going to be like Gatti-Ward, because you’ve seen how I fight, and you’ve seen how he fights. This is what I want.”