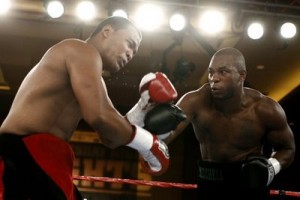 Seth “Mayhem” Mitchell never saw himself as a professional boxer. Mitchell was an All-American Linebacker at Michigan State University, before injuries forced him to give up his dream. He turned to boxing, and after a short amateur career that began in 2006, he turned professional in 2008. Mitchell has learned the intricacies of his craft on the fly, as many before him have done. His rise through the heavyweight ranks has been steady and measured.

After limited exposure on the untelevised undercards of recent Golden Boy Promotions fight cards, Mitchell appeared on Showtime, knocking out Evans Quinn in 1 round. With a televised appearance on HBO coming up, The Boxing Tribune recently talked to rising heavyweight prospect Seth Mitchell (22-0-1, 16 KOs). He spoke candidly about last Saturday’s heavyweight unification bout between Wladimir Klitschko and David Haye, the state of the heavyweight division, his place in the sport, and the opportunities coming his way.

Seth Mitchell: I can’t complain. Everything’s going well, I’m staying busy and staying active, and I’m just starting to get a lot of name recognition. I’m happy with my progress this far.

BT: As a heavyweight prospect, I have to ask you about Saturday’s Klitschko –Haye fight. Did you get a chance to see it?

BT: What did you think about it?

SM: I wasn’t surprised at the outcome. I felt David Haye could win a decision, but I thought if anyone got knocked out it would have been David Haye. But I thought he had a puncher’s chance of winning. Everybody was really excited about the fight, but I didn’t get my hopes up because I thought it could be a boring fight because the only way David Haye could win a decision was to stay on the outside and move around and do what he did and try to catch Klitschko coming in. But I pretty much knew the fight was going to end up like it did.

BT: Given the talk of David Haye and what he said he represented, were you rooting for a David Haye victory?

SM: I was rooting for a David Haye victory. I thought that it would have been good for the heavyweight division to, you know, add some new life into the division. In David Haye’s previous fights he showed style and charisma, but it didn’t show up on Saturday night. That’s why people feel the heavyweight division is in ruins right now, because they have fights like that – that aren’t really that entertaining as they promised.

BT: What are your thoughts on the heavyweight division in America? In Europe it’s looked upon more favorably. What’s your take on the fans’ reception to the division here in the states?

SM: I think it’s lackluster, you don’t have the big names and you don’t have people that want to get in there and actually fight. We’re heavyweights for a reason. People want to see exciting fights. Don’t get me wrong, I’m not saying people want to see you go out there and trade blow for blow, but you have to give the people what they want to see. You have to be smart, but you want to entertain and you want to win. I believe my style of fighting would be called “aggressive boxer-puncher”. I say “aggressive” because I bring the fight to my opponent, and at the same time, if you hit me I’ll hit you. But I do come to fight and I don’t see myself being involved in any boring fights. That’s why I think the heavyweight division is where it’s at, because there aren’t any fighters that actually want to get it there and put on an exciting fight. The heavyweights today they don’t let their hands go and they don’t throw enough punches. They grab and hold and I think the heavyweight division needs someone to come along and bring excitement back to the division.

BT: I’m going to name a few guys here: Chris Arreola, Eddie Chambers, Tony Thompson, and Kevin Johnson. They all have 2 things in common: They were all touted as the next big American Heavyweights – well maybe not so much Tony Thompson, but the rest. The second thing is they all lost to a Klitschko. What sets Seth Mitchell apart from the guys I just named?

SM: I think the people that you named are good fighters. They definitely can fight, but I think it’s my time and I’m blessed with the size; I’m 6’2”, so I’m not a small heavyweight. I’m a true heavyweight, I’m 245 pounds and I walk around at 255 pounds. I possess the speed, the power, and the athletic ability that is in my nature. But I believe that I have all the tools to be successful in this heavyweight division, and when the time comes to fight one of the Klitschkos I have those tools and attributes to come away with the victory. Like I said before, I’ve got the size and the power, the athleticism, and that meanness. I believe that I have that, and I’m not saying those other guys didn’t have that, but I can put it all together and become the heavyweight champion of the world.

BT: What some people might not know is you were a college linebacker for Michigan State. How has being a lifelong football player helped you transition to pro boxing, or is it completely different?

SM: I think they’re two different sports. But to succeed or compete at a high level in any sport you have to have that foundation and be determined and motivated. Football is a physical sport, so you have to have that toughness. But that’s a team sport and boxing is an individual sport, so I don’t think a lot of stuff, besides the physical toughness carries over. In boxing you have to be more mentally tough to succeed because it’s an individual sport. Me playing football doesn’t have a lot of carryover in boxing. I think more times you can have a good boxer; someone who has that meanness, and they can become a good football player more than a good football player can come over to boxing. I think boxing is tougher.

BT: What are your thoughts on guys like Tom Zbikowski and Ray Edwards?

SM: I don’t know the other gentleman that you said, but Tom Zbikowski boxed from a youngster, so he’s already got boxing in his blood. It’s not like he just walked in off the streets and started boxing, even though that’s pretty much what I did. But I believe that athletics is my gift and this is the talent that God has blessed me with that makes me somewhat of an anomaly. But Tom Zbikowski says this is his first love, and I just wish him the best.

BT: You’ve got a fight coming up on August 27. Have you started preparations yet?

SM: Absolutely. I just started on the 27th of last month. We started getting into my training camp, but we’re going to start really picking it up here in the next week and a half. I’m light training right now, but in the next week to two weeks that’s when we’ll really go full tilt. I’m really excited about this fight, opening up and having my fight televised on HBO. It’s a great opportunity and I’m looking forward to the opportunity to putting on great shows for the fans and for HBO so I can continue to get these dates on TV. I want to let the people know what I’m all about, and that’s putting on great fights. Speed and power in the heavyweight division.

BT: I was going to ask if you were getting a televised slot on HBO. Who’s fighting in the main event that night?

BT: Wow, that’s a big opportunity. Those guys come to fight and it should do solid ratings. I understand it’s taken a bit longer than expected to lock down an opponent. When do you expect to have an opponent signed?

SM: Within the next week, maybe two weeks for sure, I plan to have an opponent locked down. But out of my 23 fights I believe only 6 or 7 opponents have been named ahead of time. Me and my trainer just prepare. I prepare and train hard and I’ll be ready for whomever they put in front of my on August 27. I’ll be ready as always and in great shape, motivated, hungry, and determined. I’m excited about the opportunity and I believe my time is coming and I just want to take full advantage of every opportunity that I have. Hopefully there won’t be any setbacks.

BT: So you’ve got your first HBO fight coming up. Is this your big chance to make your mark on the American heavyweight scene?

SM: Definitely. I think this is the beginning of great things to come. I’d be lying if I said I wasn’t excited about the opportunity. I believe if you’re in anything you want to be put in position where the stakes are high. When you’re in that position you’re doing things right and you’re on your way. I realize that, and at the same time I’m not going to let the feeling or the anxiety of being on HBO take me out of my game plan. I’m extremely focused and I know what’s at stake and I know that I’m not too far away from my heavyweight goal, which is to one day become heavyweight champion of the world. I’m looking forward to it. I’m excited. I don’t make predictions, but it’s going to be an exciting fight and I definitely plan on having my hand raised at the end.

BT: Do you have any closing thoughts before I let you go?

SM: I just wanted to thank you for taking the time to interview me and let my voice be heard. I just want to put everybody on notice. Everybody that’s saying they’re looking for that next American heavyweight, someone that has speed, that has power, and that comes to fight, I truly believe they can stop looking. I’m right here. Seth Mitchell is here and it’s just a matter of time and I’m just going to continue to work hard and stay humble. Tell everybody to keep me in their prayers and look forward to August 27.