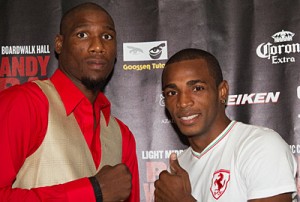 If not for the ridiculously self-defeating craziness of HBO and Showtime programming cards on the same day, at the same time, Saturday would be an outstanding day of boxing with some very competitive and interesting contests taking place. As it is, though, fans will have to choose which show to watch live and which gets saved for later. Still, there’s plenty of quality action available, especially to those with access to a DVR.

Here’s a look at the week’s biggest fights:

There’s no denying that Erislandy Lara is talented, disciplined, and skilled, but the fighter that beats Williams has to be aggressive and heavy-handed with a touch of creativity. Williams, even at his worst, is an awkward, punch-throwing machine and is only really vulnerable to those who can think outside the box and/or physically earn his respect. Unless the KO loss to Sergio Martinez has truly messed with Williams’ head or Lara completely changes his approach by fighting with more urgency and aggression, Williams should take this all-Southpaw show.

Both young fighters are very similar in style and mindset, with the difference being that Japan’s Shimoda is a southpaw. The Japanese fighter is quick and most of his offense comes from a solid straight left hand and a quick left hook. Ramos, on the other hand, is a more complete, more well-rounded fighter with a better defense and more multi-dimensional offense. Shimoda will be coming in as the defending WBA jr. featherweight champ, but Ramos is the more seasoned, experienced fighter with an outstanding amateur background and a better professional resume. Neither fighter has fought at the elite level, but Ramos will likely be a half-step ahead of Shimoda in just about every area.

Despite what his detractors say, IBF super middleweight champ, Bute does have a world class skill set and is definitely among the elite of the division. Mendy is not a bad fighter, but is clearly a full level below Bute in terms of ability and pedigree. In this battle of southpaws, Bute has the edge in every area. Mendy is too passive and laid back to apply any real pressure to the defending champ and with Bute fighting in his native Romania, the challenger will need an absolute miracle to win this.

In what has the makings of a Fight of the Year candidate, Rios will be defending his WBA lightweight belt against a tough and worthy Antillon. Although this should be competitive for as long as it lasts, Rios is better than Antillon in just about every category. Antillon may have the edge in boxing fundamentals, but there’s no way this develops into a tactical contest. Rios should wear down and take out Antillon by the eighth round.

On paper, this shouldn’t even be competitive, but Cintron has made a career out of underachieving in high-profile fights. On the other hand, Molina, through sheer grit and mental toughness, has often fought at a higher level than his skills would suggest. This will be Cintron’s first fight under the Top Rank banner and major paydays await, but will he wilt under the constant pressure of a crude, but doggedly earnest fighter?