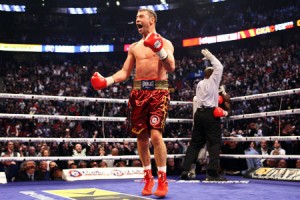 Recently, The Boxing Tribune supplied its pound-for-pound rankings to FoxSports.com, and I was unable to prevail upon my colleagues to include in the top ten a guy who, for my money, is the best fighter in the best division in boxing and ought to be third on the list behind only Manny Pacquiao and Floyd Mayweather (and second if you knock Money off the list for his inactivity until he beats Victor Ortiz and re-establishes his eligibility.) I speak, of course, of the pride of Romania and Montreal alike, Lucian Bute.

All the attention at super middleweight has been paid to the Super Six tournament, which due to promotional considerations or sniping among the sanctioning bodies or outright lunacy did not include Bute (28-0, 23 KOs) in its mega-event. Bute couldn’t even get in as a substitute, Showtime and the WBC/WBA instead opting to slot in Glen Johnson and Allan Green—and Andre Ward fought Sakio Bika to stay fresh rather than the WBA letting him try to bring Bute’s IBF strap into the unification process. Not since Isiah Thomas froze out Michael Jordan in the 1985 NBA All-Star Game has a great talent been so shamelessly left out of a shot to show his talents on a major stage.

Bute’s been accused of not fighting anybody. Yet each of his last 19 fights have been 12-rounders, first for minor titles and shots to move up in the rankings, then capturing Alejandro Berrio’s IBF title, then defending that belt seven times, with an eighth to come this Saturday against Jean Paul Mendy. With Robert Stieglitz unwilling to put his WBO title at 168 on the line, and the WBC/WBA dust-up previously mentioned, who the hell do you want Bute to fight?

Let’s look at the opponents, shall we? Bute beat Sakio Bika in an eliminator bout for the original IBF title shot back in 2007. He won the title from Berrio as previously mentioned. Defenses came against William Joppy, Librado Andrade (twice), Fulgencio Zuniga, Edison Miranda, Jesse Brinkley, and Brian Magee. Fine. It’s not exactly a murderer’s row. Guys like Mikkel Kessler, Carl Froch, Kelly Pavlik, Allan Green, Andre Ward…all missing in action. But again. This is a legit world title holder fighting against the guys put in front of him to defend his title while the other sanctioning bodies freeze him out of a chance at fighting the best guys. Did Bute’s people know that was going to happen in 2007 when they fought for the IBF title so they’d have presumed leverage in negotiations? He’s fighting the best guys available to him and blowing them out of the ring.

You can yell and scream and rant and rave about Marlon Wright, you can yap about the “long count” win over Librado Andrade (never mind that Bute knocked out Andrade in four rounds in the rematch), you could even say “well, he fights in Quebec, he’s just David Lemieux with better PR”. But the fact remains—Bute has fought everyone put in front of him, he is 8-0 with seven knockouts in world title fights, he has fought only two guys with losing records in his entire pro career (and knocked them both out), and with the exception of the first fight with Librado Andrade, has never looked anything but in control.

We will have to see whether Bute is put in a position to fight the Super Six champion (likely Andre Ward). We will see whether Robert Stieglitz overcomes his fear for long enough to risk his WBO strap for a shot at true legitimacy in the division. We will even see whether Bute can put together a sustained reign of dominance like a couple of heavier dudes whose native country shares a land border with Bute’s.

Before I go any further, a disclaimer—in the boxing press, a writer talking up a fighter he likes is often accused of being in the employ of that fighter’s promoters. I am under no such conflict of interest here. Even the Tribune’s Fearless Leader said “LOL! Bute at #3?” when I submitted my pound-for-pound rankings to him. There is no hidden agenda here, no promoter money, no influence from the IBF (I’m no more in favor of alphabet soup corruption in boxing than anyone else), no nothin’. You could make the argument that I’m just another writer playing favorites (guilty as charged, I guess, but I write opinion columns. This tends to require opinions.) But you want to tell me Bute couldn’t hold his own against the elites in the strongest division top-to-bottom in the sport? Get him in the ring with the Ward-Froch winner. If Bute loses, I’ll shut my damn fool mouth about it. But I think the Romanian is going to knock out Jean Paul Mendy in statement-making fashion then set his sights on getting people other than me to talk him up.

Fox Doucette covers Friday Night Fights for The Boxing Tribune. His column, The Southpaw, appears on Thursdays. Fan mail, hate mail, and requests to answer email while wearing boxing gloves and a lucha libre mask and making sarcastic comments can be sent to beatcap@gmail.com.