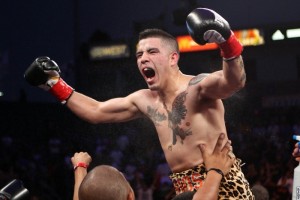 Home Depot Center, Carson, California– Showtime’s highly-anticipated lightweight showdown between Brandon Rios (28-0-1, 21 KOs) and Urbano Antillon (28-3, 20 Kos) completely lived up to the hype despite being a lot shorter than anticipated.

As expected, both fighters immediately engaged in a toe to toe battle, with Rios getting the best of the exchanges.

In the third, Rios connected with a crisp right hook that sent Antillon to the canvas. The former two-time title challenger beat the count, but would get dropped again by another right hook after some more fierce action. Despite once again beating the count and willing to engage, Antillon was unsteady on his feet and suffering from balance issues that encouraged the ref to call en end to the contest.

On the televised undercard, Carlos Molina (19-4-2, 6 KOs) outworked and outfought the favorite, Kermit Cintron (32-4-1, 28 KOs), and took the unanimous decision by scores of 98-92 all around. The Boxing Tribune also scored the bout 98-92 in favor of Molina.

Cintron, a recent signee to Top Rank Promotions, had been mentioned in rumored bouts with Manny Pacquiao and Miguel Cotto, but fought without any urgency or spark as Molina consistently beat him to the punch and dictated the pace of the contest.

Molina, undefeated since 2007, continues his unlikely rise to the top of the rankings with his dogged style and blue collar work ethic. In his last five, Molina holds wins over Cintron, Allen Conyers, Danny Perez, and Ed Paredes, as well as a draw with Erislandy Lara.