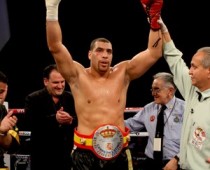 Maurice “Sugar Moe” Harris (24-15-2, 10 KOs) is looking to rebound from defeat with a bout against Derric “The Shaolin Fist” Rossy (25-4, 14 KOs). The Resorts Casino Hotel in Atlantic City, New Jersey will play host to this 12-round heavyweight bout.

Harris has seen a career of ups and downs. After 3 years out of the sport, Harris returned in 2010 to fight 4 times, mostly against club-level opposition in 6 and 8-round fights. He got back on track last August with a win over fringe contender Nagy Aguilera. In his last fight, a box-off for the #2 spot in the IBF’s heavyweight rankings, Harris was knocked out by Tony Thompson in 3 rounds.

Derric Rossy has lost his last 2 fights. In February he was outpointed by Eddie Chambers in an IBF #1 contender eliminator, and was most recently knocked out in 5 rounds by Kubrat Pulev. Rossy holds victories over former Olympic gold medalist Ray Mercer and former contender Carl Drummond.