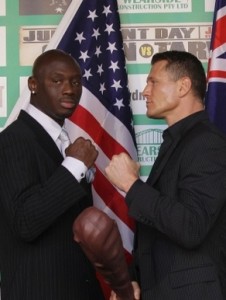 The 38-year-old Green, who outpointed American, BJ Flores in his last outing, is looking at a victory over Tarver as the signature win of a ten-year career that has featured stoppages against the likes of Roy Jones Jr. and Eric Lucas.

“We are well and truly aware of what we are up against in this fight. He’s a phenomenal fighter,” Green told the Herald Sun. “He’s a future Hall of Famer, but…When the bell goes, he’s a piece of meat that’s in front of me that I have to break down, chop up and do my job again.”

Tarver, 42, will be making his debut in the cruiserweight division after a lackluster points win over Nagy Aguilera in a heavyweight bout last October. As a light heavyweight, Tarver is widely regarded as one of the better 175-pounders of his generation, with a series win over Roy Jones Jr. as well as a 1-1 split with Glen Johnson and victories against Clinton Woods, Montell Griffin, and Eric Harding. Tarver’s high-profile losses include Bernard Hopkins and two defeats at the hands of Chad Dawson.