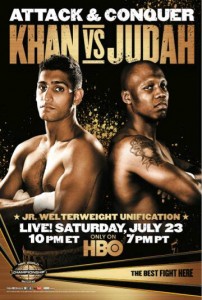 After his April 16 technical decision win over lightly-regarded Paul McCloskey, Amir Khan was unable to land a unification bout with WBC/WBO jr. welterweight champion Timothy Bradley. After a back-and-forth war of words fought over Twitter, Khan and Judah agreed to terms. Khan has won 7 straight since his upset knockout loss to Breidis Prescott in 2008, with wins over Andriy Kotelnik, Dmitriy Salita, Paulie Malingaggi, and Marcos Maidana.

After a long career filled with ups and downs, Judah is making another run at jr. welterweight supremacy. After his 2008 loss to Joshua Clottey, Judah returned to ESPN’s Friday Night Fights and independent pay-per-view, and ran off 3 straight victories before getting another shot on HBO. A shaky win over jr. welterweight slugger Lucas Matthysse earned Judah a shot at the vacant IBF title against Kaizer Mabuza. After a dominant March 5 performance, capped off by a highlight reel knockout of Mabuza in the 7th round, Judah is looking to add the WBA title to his collection.

(Check Back for more Khan-Judah coverage from The Boxing Tribune)