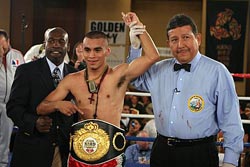 With the IBF featherweight rankings a mess (vacant champion and vacant #1 challenger slot), the organization has set up an eliminator this Saturday, July 23 in Guadalajara between Eduardo Escobedo (31-3, 22 KOs) of Mexico City and Joksan Hernandez, from Ensenada, Baja California.

Escobedo-Hernandez is a rematch of a bout won by Escobedo via unanimous decision in January of 2010. Since then, Escobedo, who currently resides in Jarrell, Texas, is 4-0, most recently scoring a TKO 3 victory over veteran, Mauricio Martinez in June. The 27-year-old is most famous for a UD 12 loss to Daniel Ponce de Leon in 2007.

Hernandez, 24, is 5-1 since the loss to Escobedo. In December of last year, he dropped a unanimous 10-round decision to Jorge Lacierva at super featherweight, suffering four knockdowns in the bout. In April, he beat veteran Ricardo Castillo via majority decision.