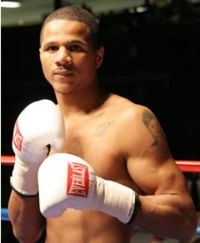 Even the most optimistic promoter wouldn’t say “look out Klitschkos, there’s a new boxing brotherhood in town”. But brothers Andre and Anthony Dirrell doubtless hold that ambition at super middleweight. Anthony (22-0, 19 KOs) is in action on Friday Night Fights on ESPN2 this week against Kevin Engel (18-4, 15 KOs) in what looks to be a showcase more than a contest.

Engel, for his part, has fought two undefeated prospects in Marcus Johnson and Edwin Rodriguez, and both times he was knocked out. Engel fell in the fourth round of a six-rounder against Mike Word in 2008, who carried a 4-11-3 record into that fight. This will be Engel’s second fight at super middleweight after moving down from light heavyweight, and he was knocked out in his last fight against Johnson.

Dirrell hasn’t exactly beaten the Super Six himself. So effortless have his knockouts of journeymen been that he is maintaining a Chris Arreola-like work rate this summer. A third-round TKO over Alberto Mercedes (who has a losing record) and a fifth-round stoppage of Dante Craig just three weeks ago (who took his tenth loss in the process) have been less about heavy-duty growth as a fighter and more about hitting heavy bags with arms and legs.

The co-feature offers the more intriguing match-up, between up-and-coming fighters. Joseph Elegele (12-0, 10 KOs) takes on Lanard Lane (12-1, 7 KOs) in a welterweight contest that smacks of the old pro wrestling “win or go home” match. Lane has been inactive for a year since taking his first loss last July 16 against then-unbeaten Mike Dallas Jr. Elegele beat an unbeaten prospect in Manuel Aguilar back in January. One fighter will use Friday’s ten-rounder as a showcase and a springboard to some sanctioning body’s regional-belt track. The other will have questions asked about his record and whether he is a prospect or simply a guy with an inflated record. Two fighters with some knockout power and everything to fight for? This should be a very competitive fight.

Is Anthony Dirrell worthy of the accolades thus far reserved for his brother? Is Kevin Engel just another tomato can or will he give Dirrell a contest? And might there be a new sheriff in town coming up through the ranks at 147? Fans will find out on Friday night, July 22, at 9 PM Eastern/6 PM Pacific, on ESPN2, ESPN3.com, and popping right out of the screen on ESPN 3D. The Boxing Tribune will have a full recap after the fights are over.

Fox Doucette covers Friday Night Fights for The Boxing Tribune. His column, The Southpaw, appears on Thursdays. Fan mail, hate mail, and cans of tomatoes can be sent to beatcap@gmail.com.