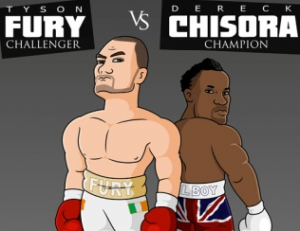 Promoters are calling it “The Big Brawl to Settle it All”. Like most promotional fight titles, it is equal parts misleading grandeur and apt descriptor rolled into a smorgasbord of half truths all aimed at separating you the consumer from your hard-earned money.

No matter what it’s called though, Tyson Fury vs Dereck Chisora is the second heavyweight fight this month that boxing fans are daring to get excited about, and unlike Klitsckho vs Haye, this one could actually delivery the thrills and spills for which fight fans have been yearning.

Fury vs Chisora features two young, undefeated heavyweights that look as if their best days are still actually ahead of them rather than behind. The winner of this fight will be on the short list of opponents for one of the Klitschko brothers’ next fights, and even the loser (depending on how he loses) could be set up for bigger fights down the road.

Dereck Chisora may not be the official headliner of the contest, but he’s the fighter entering the fray with actual title belts on the line. The undefeated Chisora (14-0, 9 Kos) picked up the British Boxing Board of Control heavyweight title in 2010 by TKO over former Mike Tyson-conqueror Danny Williams and followed it by picking up the Commonweath Boxing Council heavyweight crown just a few months later against Sam Sexton.

Chisora was scheduled to fight Wladimir Klitschko last December before an injury to the champion postponed it to May, but then Klitsckho wisely halted the scheduled bout so he could fight David Haye in July.
Whether Chisora is actually a world class competitor remains to be seen, but his bout against undefeated challenger Tyson Fury (14-0, 10 Kos) will go a long way in deciding it. And a win would probably set a date against Wladimir Klitsckho.

Meanwhile, Tyson Fury is already famous for two things he probably would rather be known less for than his actual status as a heavyweight contender. First, the name of Tyson, which was given to him by his boxing fan father, has perhaps placed him on many boxing fans’ radars long before he actually should have been. And second, he’s the first fighter in this new information age of Youtube and Twitter, where nothing can be hidden from public view, to be caught in a bout accidentally punching himself in the face.

Still, in boxing it is probably better to be known for something (even punching yourself in the face) than nothing at all, and Fury would have never gotten to this point in his career without actual skill as a fighter.

So sure, “The Big Brawl to Settle it All” may not really settle it all, but it should be a pretty good tussle between two skilled big men, and frankly boxing could use another one or two of those.
The trash talk has certainly been up to par.

During last week’s conference call, Fury raised the eyebrows of many across the world with remarks that alluded to actually killing Chisora inside the ring.

“I’ve a wife and two kids to provide for and if it means killing [Chisora] in the ring, that’s what I will have to do,” Fury said.

“To beat me he will have to kill me because I’m prepared to die in the ring. I’m putting it all on the line. I’m going to snap [Chisora’s] chin off [his] body,” he continued.

Chisora responded appropriately by hanging up the phone and refusing to participate in any more conference calls before the fight, but he would later go on to tell the Sun that he would “whup” Fury before moving on to bigger and better things.

The build-up has been worthy of a big time heavyweight fight, and each fighter’s undefeated exploits have boxing fans around the world intrigued about the fight – much more so than usual for a clash of European big men.

Chisora is an aggressive fighter who could present real problems for the lanky Fury. He’s heavy handed, athletic and stays busy. Meanwhile, the 6’9” Fury has the reach to give almost anyone problems. He works behind a solid jab and has shown power behind it with an excellent straight right cross. More importantly, instead of only relying on his long reach, he has shown a willingness to let his hands go to make the fight.

Dereck Chisora vs. Tyson Fury won’t be the biggest fight of the year, month or even day (Zab Judah faces Amir Khan later that day in Las Vegas, Nevada), but it is another important event in a heavyweight division that desperately needs it. If anything, the winner of this fight has a legit chance to meet a Klitsckho brother in the ring soon, and isn’t a young, undefeated heavyweight challenger immensely more interesting than another challenger retread?

Kelsey McCarson likes the heavyweight division whether you do or not. Argue with him about it on twitter by following @TheRealKelseyMc.