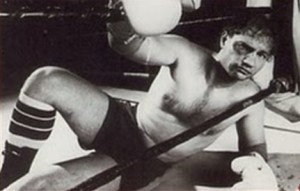 Regular readers of this column know my love for the fringes of boxing, whether it’s up-and-coming fighters who haven’t made their names yet, former champions holding on to past glory, or just a good scrap between guys who are long on action and short on skill. For my money, the best action isn’t shelling out $50 or more for a dull-as-hell Pacquiao pay-per-view, not when I can get my boxing fix from Friday Night Fights or ShoBox or HBO Boxing After Dark for little more than the price of my cable service.

There is another subset of the boxing world I haven’t discussed, and this week’s FNF main event made me think of it. Kevin Engel, the “lamb to the slaughter” (as I put it on Tuesday in the preview) for Anthony Dirrell, has on his boxing resumé a knockout loss to a guy named Mike Word, who came into that fight 4-11-3 and interestingly fought most of his fights against undefeated guys. Engel also owns a knockout win over David Robinson (the Oklahoma-based journeyman fighter, not the basketball player), who, as of this writing, is 26-64-4 and has been knocked out an amazing 33 times! Robinson has been fighting for 23 years, making his pro debut in 1988, the only time in his life he could say he had a winning record in the pros, after he knocked out Donald Hellyer in the second round.

Look around Boxrec and check the records of any well-known fighter and you’ll find at least one of those kind of guys on their record—whether it was a tune-up fight after a loss or before a title shot, a bit of soft competition on the way up, or even a desperate-to-stay-relevant fight or a way to go out with a win at the end of a long career, there is always a willing sucker who is willing to get his brains bashed in for less money than it would take to pay the doctor to fix the brain damage. It always seems like Midwestern and Southern states are involved too, states with weak commissions that will license anybody even if they once spoke like Morgan Freeman and now sound like Sylvester Stallone chewing the scenery in a Rocky movie.

These losing record guys aren’t always served up as dead man walking to a prospect or a former champion. Sometimes they fight each other. On October 22, 1999, at Grand Victoria Casino in Rising Sun, Indiana, fans were treated (?) to a four-round fight between Teddy Worth (4-23-1, 2 KOs at the time of the fight) and Julio Ibarra (10-35-1, 5 KOs). Worth came away with the four-round unanimous decision, and I like to think the ring announcer was doing his level best to sell that fight as only the hardest of hardcore fans paid any attention at all. What was at stake in a fight like that? A win to pad a record and make the winner look a little less pathetic for the strength of schedule of the prospects he’d go on to lose to? Worth (the winner) did go on to fight a bunch of guys with zero or one loss before finally hanging up the gloves in 2002, after Billy Irwin (who had recently lost to Paul Spadafora for the IBF world title at lightweight) beat him in a six-round fight, the first of Irwin’s eight wins in a row en route to another title shot (when Juan Diaz knocked Irwin out and ended his career.) But Ibarra didn’t exactly go away—the loss made him look more vulnerable for the five guys he lost to before ending his career.

Just looking down the records of a guy on Boxrec is fun enough, and seeing a guy with a record like 4-23-1 or 10-35-1 or 4-11-3 can give a reader pause and think “wow, what’s with that guy letting himself get beat up like that?” But every one of those opponents is a human being with goals, dreams, hopes…so it does bear an examination of “why’s he do it?” There are better ways to make money out there than to be beaten senseless for a few bucks a round.

So here’s a call to all the promoters, fighters, trainers, and everyone else connected with the sport. Send me your stories. If you’re in the Reno/Sparks area, contact me and I’ll buy the coffee and bring my notebook. I want to be the Mike Rowe of the dirty job of journeyman boxing. The mayor of Palookaville on Foursquare, if you will. You give me the stories, I’ll run them in a future installment of this weekly column, and fans of the Sweet Science will get their answer to the question I posed—“why’s he do it?” And alert readers who have been at fights like the Worth-Ibarra scrap in Indiana? Send me those stories too.

Fox Doucette covers Friday Night Fights for The Boxing Tribune. His weekly column, The Southpaw, appears on Thursdays. He salutes anyone brave enough to lace up the gloves, not just the champions. Fan mail, hate mail, or replies to the call to arms in the article can be sent to beatcap@gmail.com.