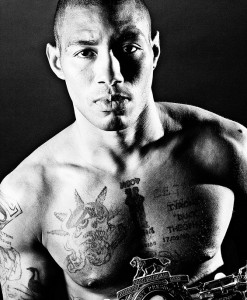 British jr. welterweight champion Ashley “Treasure” Theophane (29-4-1, 7 KOs) defends his title against Jason “The Power” Cook (28-3-1, 14 KOs) on Saturday July 23, from the Wembley Arena in Wenbley, London. The fight will take place on the undercard of Chisora-Fury, and will be broadcast in the UK on Channel 5, and on Integrated Sports Pay-Per-View in the United States.

Theophane captured the BBB of C British jr. welterweight title in February, taking a close 12-round unanimous decision victory over Lenny Daws. After spending much of his career going back and forth between welterweight and jr. welterweight, Theophane has stated he will pursue bigger fights in the jr. welterweight division. Over the course of an 8-year career, Theophane’s notable wins have come over Demarcus Corley (UD8), and Delvin Rodriguez (MD10).

Cook, the BBB of C Welsh Jr. welterweight title holder, has not lost since his 2009 loss to Gavin Rees in the semi-finals of the Prizefighter Tournament. In his last crack at the British jr. welterweight title, Cook scored a draw with then-champion Lenny Daws.