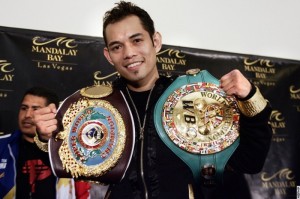 After weeks of rumors, bantamweight star, Nonito Donaire, along with Top Rank President, Todd Duboef, announced the reconciliation between the fighter and the promotional company in a statement issued to the press today.

The announcement finally puts an end to the Golden Boy-Top Rank tug of war over the Filipino-American star, initiated shortly after Donaire scored an impressive TKO 2 victory over veteran champion, Fernando Montiel.

In March, an arbitrating judge ruled in favor of Top Rank in the inter-promotional struggle for the reigning WBC/WBO champion, but another court date was pending to decide on the legality of Donaire’s existing contract. This becomes null and void as Donaire has now committed to a multi-year deal with the promotional firm which oversaw the biggest bouts of his career.

At the time, though, the attempted defection drew the ire of Top Rank CEO, Bob Arum, who was extremely critical of the 28-year-old Filipino Flash and his star power:

“I mean, it’s not like I got another Manny Pacquiao. He’s a bantamweight and he wants to go up and I got four fighters who probably could beat him. You know, Lopez, Gamboa, you know, or Rigondeaux. I mean, he’s not going to beat those guys…it’s not big business,” Arum told the media shortly after the attempted migration. “He’s not a pay-per-view fighter; the Filipinos don’t support him.”

In the press release today, Top Rank’s Duboef described Donaire as a fighter with “unlimited ability and charisma” and stated that “a bright future lies ahead for Nonito and Top Rank.”