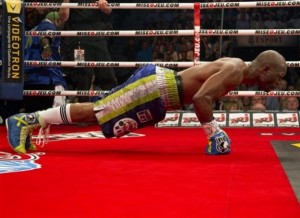 The best thing about boxing is that the “season” lasts all year. Since we‘re just about halfway through the year, let’s have a look at how it’s going so far.

More than any other sport, boxing relies on its biggest stars to deliver. No group of fighters is more important to the sport than the pound-for-pound elite. As they go, so does the sport in general. Let’s see how they’ve done so far this year by taking a look at The Boxing Tribune’s latest P4P rankings (from July 10) and assigning mid-term grades to the fighters.

1. Floyd Mayweather may be ranked on top of our P4P list, but his performance in the year thus far has been nonexistent. Sure, he’s scheduled to fight September 17 against the hard-hitting Victor Ortiz, but he hasn’t actually done anything this year to be graded on. If he wasn’t facing such a strong opponent after such a long layoff, he’d be set for an F, but as it is he’ll get time to prove himself. GRADE: INCOMPLETE

2. Manny Pacquiao is tough to grade. If you look at him as a blown up lightweight beating up welterweights, then you have to give him an A. But if you look at him as a prime welterweight picking on over-the-hill and washed up fighters like Mosley and Margarito, then you have to give him a C (at best). Since it’s the middle of the year, I’m willing to split the difference and give him a B for now. His November 12th fight with Juan Manuel Marquez would be better if it wasn’t at 144lbs but we’ll see how it all goes down before we grade him on that one. GRADE: B

3. Sergio Martinez is brilliant inside the ring. So brilliant, in fact, that I expect more out of him than fights against the likes of Serhiy Dzinziruk and Darren Barker. Perhaps more importantly, Martinez seems content calling out fighters like Manny Pacquiao and Floyd Mayweather to come up two full weight classes to take him on at middleweight, but refuses to do the same by fighting exciting fights beyond his current division. Boxing needs more from Martinez. GRADE: C

4. Nonito Donaire is a rare talent, but promotional issues keep him from actually displaying it too often. He’s quick, skilled and powerful, but none of it matters if he never fights. “The Filipino Flash’s” last bout was in February – a shocking second round knockout over Fernando Montiel. He has plans for a return to the ring this year but no official opponent yet. That’s not good enough for this class. GRADE: F

5. Juan Manuel Marquez is an all-time great but he’s only fought once this year thus far: an all-too-easy looking first round KO of some guy you’ve never heard of. Still, he’s done just about anything and everything he can do to get a third fight with Pacquiao, and while I’m not thrilled about the matchup at the catch weight of 144lbs, I don’t blame Marquez for trying to make the fight. If anything, I commend him. GRADE: B

6. Bernard Hopkins beat Jean Pascal in May to become, at age 46, the oldest fighter to ever win a championship belt. That alone would get him an “A” from me, but he’s followed it up with scheduling a fight with arguably the best light heavyweight around in “Bad” Chad Dawson. The old man sets the curve in this class. GRADE: A+

7. Fights fans didn’t get all they bargained for when Wladimir Klitsckho finally got David Haye in the ring, but that wasn’t all Klitsckho’s fault. If anything, it was up to the big talking Haye to make the fight since Klitsckho was winning virtually every round with his jab alone. Still, regardless of what you thought about the actual fight, the build-up leading up to it renewed interest in the sport’s most important division – something it badly needs. GRADE: A

8. Andre Ward defeated Arthur Abraham in the semi-final of Showtime’s Super Six Super middleweight tournament. Next, he’s scheduled to face Carl Froch in probably the best final we could have hoped for. He’s America’s fastest rising star, and he just keeps winning. He might be a bit too skilled for the casual fight fan, but his ring savvy and ability make him one of the most scientifically sound fighters in the game. GRADE: A

9. Timothy Bradley faced Devon Alexander to determine the best American 140lb fighter. He defeated Alexander by doing what he always does: hustling and being aggressive. Somehow, though, he seems to have left all that in the ring, because afterwards he refused a match with Amir Khan in what would have been the division’s biggest match-up. Can’t really call that aggressive. Since then, Khan has staked his claim as the best in the division by blasting out Zab Judah in 5 rounds. It just makes Bradley look that much worse. GRADE: D

10. Vitali Klitschko participated in a fight last May with the undefeated but untested Odlanier Solis. Solis twisted his knee in a freak first round accident after a Vitali punch to his temple, and the elder Klitsckho Brother got the knockout victory. His next fight is scheduled for September 10 against surging Tomaz Adamek. There’s not a lot out there for either Klitsckho to fight in terms of real competition, but Adamek is aggressive, tough and fits the bill of “game challenger.” GRADE: B

So there you have it. The elite of the elite are currently pulling down a solid B average. That’s not quite good enough for me, so let’s hope the second half of the year lives up to its potential. Fights like Mayweather-Ortiz, Pacquiao-Marquez III and Klitsckho-Adamek could make 2011 a year to remember.

Kelsey McCarson gives lectures via twitter. Sign up for class by following @TheRealKelseyMc and don’t worry, he probably won’t block you for not agreeing with him. Probably.