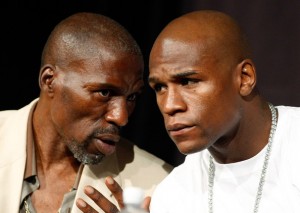 When Floyd Mayweather enters the ring in September for his “come back” fight against Victor Ortiz, he will no doubt be flanked by his chief second, Uncle Roger Mayweather. Floyd’s father’s brother has been a staple of his corner since his 2004 fight with Emanuel Burton and has been a source of constant controversy.

Roger managed to stir the pot on a familiar subject last week, accusing another Freddie Roach fighter, Amir Khan, of taking performance-enhancing drugs. While similar accusations about Manny Pacquiao were at least potentially justified by the fact that Pacquiao has shown reluctance to take drug tests, accusations against Khan were completely out of left field, and seemed like an act of pure jealousy against the best trainer in the sport.

With Floyd seeming to try and alter his image, judging from his humble behavior thus far in the build-up to the Ortiz fight, it seems odd that he would keep a guy around who is constantly fueling controversy and drama like this.

What Floyd is getting out of this relationship has been a subject of debate in the boxing community for some time, and of course, it’s impossible to put yourself totally in the man’s head. One could argue though, that Floyd’s legendary discipline in training, combined with the fact that Roger has never proven himself as an elite trainer based on his work with other fighters, means he really doesn’t need these kind of headaches.

As to how much Floyd’s in ring performance is actually tied to the presence of Roger, it’s impossible to say. Conventional wisdom around the sport however tells us that “not that much” seems like a fair answer. A student of the game since the age of two, Floyd likely knows everything that a man can be taught about the sport of boxing. His aforementioned discipline in the gym is well documented, so it is hard to imagine anybody that can get Floyd ready for a fight better than Floyd himself.

However, one cannot deny that despite his often knuckle-headed comments, Roger is pretty damn knowledgeable about the sport himself. When the majority of the boxing community thought that Shane Mosley had the goods to give Floyd hell in his last fight, Roger and his brother Floyd Sr. ended up being 100% correct in their predictions that Shane both didn’t have the jab to hang with Mayweather, and would seem jittery and unable to pull the trigger.

Also, while “Money” himself often brags about the fact that he doesn’t watch tape on opponents, as he feels no need to scout what somebody else is capable of, Roger does put in that kind of time developing specific strategies. His critics would argue though, that while he may have a plan, when the fight starts, his between round advice usually is limited to colorful expressions like, “You whoppin’ his ass, keep whoopin’ his ass.”

Beyond all this, the unknowable factor is how much emotional comfort having his uncle in the corner provides Floyd. In the Mosley fight after Floyd was tagged in the second round Roger showed absolutely no panic. In fact, he had the cool, calm demeanor you would expect of a trainer who was working his charge through a soft sparring session, not a PPV mega-fight.

In the end, whether Roger’s presence is more about his ability or simply family loyalty, only Floyd knows for sure. What is clear, however, is that in Floyd’s apparent quest to win back some of boxing’s fickle fan base, Roger is not helping.

Sean Morehouse can be reached by email at morehouse1734@yahoo.com or followed on Twitter @morehouse17.