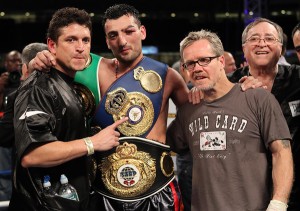 Followers of the 154-pound division know that right now that weight class is wide open, with a slew of not-quite-there-yet fighters competing in what amounts to a free-form sort of tournament to decide who will reign as the division’s king. Once Miguel Cotto finally hangs up the gloves as the division’s consensus #1 guy, he is going to pass the torch to someone, it only remains to find out whom.

Every sanctioning body has its own idea about who the answer should be. The WBA has Austin Trout (holding its regular belt; Cotto is the “super champ”.) The WBO has Sergiy Dzinziruk. Cornelius Bundrage is the IBF titleholder. And the WBC has Saul Alvarez.

The WBC’s #1 contender, Vanes Martirosyan (30-0, 19 KOs), fights Alfredo Angulo in an eliminator– with Alvarez having until next June to fight the winner. I caught up with Martirosyan to get his thoughts on the state of the division, his place in it, and the fights that have been available to him, including the Angulo fight.

Vanes, when asked why Alvarez wouldn’t be his next opponent, told me that “I thought that was the plan with the WBC. I’m the #1 contender, but Alvarez doesn’t want to fight me, so I just get in the gym and fight who they tell me to fight.” A lot of guys talk about wanting to fight the best in the division (Floyd Mayweather and Manny Pacquiao, I’m looking squarely at you), but hearing it off-the-cuff rather than in a canned on-camera publicist-manipulated way lends the comments far more weight—Martirosyan hasn’t backed down from anyone in 30 fights and it is easy to think that Golden Boy is protecting El Canelo, hoping that the Armenian slips up sometime between now and next June (or trying to manipulate the WBC into keeping Martirosyan off of Alvarez).

This brought up another question, namely why even bother with trying to grab the WBC belt that is being kept from him via bureaucratic hoop jumping. Why not fight Trout or Bundrage or Dzinziruk? The answer was simple: “Same thing, those guys won’t talk to me, they don’t want to fight me.” This brings to mind a central paradox of the sport—world champions never want to fight the best guys once they’re champ, but getting a belt means beating the best guy. It’s a wonder anyone ever fights at all.

Vanes predicted a knockout of Angulo, and when I asked him to give me a round prediction for when that KO would come, he showed restraint, not wanting to give Angulo too much bulletin-board material, but he did answer the question:

“I don’t know, it’ll all come down to how much punishment he can take. Angulo is too slow and he only fights one way, coming forward, if he does that I’m gonna box him and keep tagging him until I get him out of there.”

Angulo has the typical Mexican style of coming forward and putting relentless pressure on his opponent, walking in and slugging rather than making a technical fight out of it. Saul Roman tried the same, even dropped Martirosyan in the first round before falling victim to TKO in the seventh, and the style reminded me of a certain other fight at 154, namely the Fight of the Year candidate between Pawel Wolak and Delvin Rodriguez on Friday Night Fights a couple of weeks ago.

I asked Martirosyan whether he’d be willing to mix it up with Angulo and turn it into a slugfest. He was enthusiastic about the idea, showing a fighter’s bloodlust that fans love to see, and saying “I’d love to get into that kind of a fight. Delvin didn’t have the power to get Wolak out of there and neither did Wolak so they did a lot of standing in there and wasting punches. If Angulo wants to get me into that kind of fight, I’ll knock him out.” When I mentioned that it would be TV-friendly and good for his marketability as an action fighter, Vanes said “Oh, definitely. I want to give the fans a great fight and Angulo can’t handle what I’ll give him.”

At the last, I asked Martirosyan “anything else you want to say to your fans?” and he said “Just thank you for supporting me, and follow me on Twitter at @vanesboxing and on my Facebook page, Vanes Martirosyan.”

Martirosyan-Angulo is still in negotiations for a final date, time, site, and television deal; The Boxing Tribune will have news and coverage when the fight is finalized; it has been ordered by the WBC, with the winner becoming Alvarez’s mandatory challenger. Per the WBC’s bylaws that title fight would take place no later than June 18, 2012.

Fox Doucette covers Friday Night Fights for The Boxing Tribune. His column, The Southpaw, appears on Thursdays. Fan mail, hate mail, and interview requests for fighters can be sent to beatcap@gmail.com.