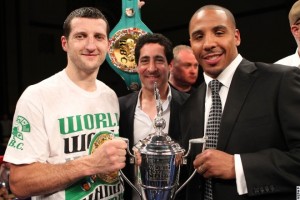 As we head into a weekend devoid of a marquee fight on HBO or Showtime, boxing fans in the states will be left to make do with only 3 televised cards this weekend: ESPN’s Friday Night Fights, Telefutura’s Solo Boxeo, and Saturday’s Top Rank Live on Fox Sports. In the spirit of spending the weekend looking for hidden internet streams of foreign fights, I’ve compiled a list of 10 fights you should be paying attention to as we head into the second half of the year.

The big fights on the calendar won’t make this list, as anyone who can fog up a mirror generally knows that Klitschko-Adamek takes place on September 3, Mayweather-Ortiz is on September 17, Martinez-Barker is on October 1, Pacquiao-Marquez 3 will take place on November 12, and Miguel Cotto gets a shot at revenge against Antonio Margarito on December 3. While I have listed a few premium cable broadcasts, the majority of the fights listed will take some dedication to find, but they should be worth the effort.

Agbeko and Mares will decide the winner of the less publicized of Showtime’s two tournaments. Originally scheduled to decide the Bantamweight Tournament winner and IBF champion in April, a back injury forced Agbeko to withdraw only 3 days prior to the bout. Agbeko is as tough as they come, and showed in his last bout against Yonnhy Perez, that he can box and move when called upon to do so. Mares is a young, athletic fighter that has shown a proclivity to forget the pleasantries of his arsenal in favor of a toe-to-toe battle.

Herrera narrowly defeated Provodnikov in their first meeting in January, the opening bout of the ESPN 2 Friday Night Fights 2011 calendar. The fight was exciting and began a year of quality fight cards for Friday Night Fights. Herrera and Provodnikov would go on to win their next 2 bouts, and will meet in a rematch on Friday Night Fights. Readers of The Boxing Tribune won’t see this one slip past them, as our very own Fox Doucette provides in-depth previews and coverage of the weekly boxing series.

Guinn may never have reached his potential as a heavyweight contender, but he provides a good test for up and coming heavyweight prospects and contenders and he doesn’t shy away from a fight. Mansour is 39 years old and doesn’t possess the size to deal with a Klitschko, but he has been an exciting fighter to watch thus far. After losing more than 8 years to a prison sentence, Manour is making up for lost time and has been active since his return late last year. This will be a nice step up in competition for Mansour, and should he dispatch of Guinn with ease, expect his handlers to take him up a level in the near future.

The Return of “El Perro” is one that many boxing fans are looking forward to. I don’t like to recommend a fight versus the dreaded TBA, but the return of Alfredo “El Perro” Angulo is against the aforementioned TBA. Angulo is an exciting fighter to watch, and after more than a year out of action, his return to the ring has left fans of “El Perro” anxious to see him in action. If Angulo can pick up where he left off, it won’t be long before he’s back in the mix at jr. middleweight…that is if he can arrange a fight outside of the United States.

Maidana isn’t technically gifted, but he hits hard and is never in a dull fight. Guerrero is a tall, fluid southpaw who keeps his opponents at the end of his long jab and straight left. This will be Guerrero’s first test at the jr. welterweight limit. The winner of this potential fight of the year will be in line to challenge for a title in a crowded division.

This is another comeback fight for one of HBO’s former regulars. After losing his WBC title to Victor Ortiz in April, Berto’s return bout is an immediate title shot against the current IBF champion, lightly-heralded Jan Zaveck. Berto isn’t what you would call a fan favorite and was always criticized for his choice of opposition, and Zaveck will do little to quiet the critics. The same crowd whose panties became bunched and tangled in their crotches over Berto’s opponents, have looked the other way as Julio Cesar Chavez Jr. has compiled a long list of light hitters and B-level wannabes as his next 2 potential opponents. But Berto-Zaveck should be an interesting fight, as we will get to see how Berto rebounds after taking some serious punishment en route to the first loss in his career, and Zaveck will get his first major U.S. exposure.

108-pounders rarely get any TV time in the states, and September 3 will be much more of the same. Hirales will travel to the Philippines to defend his WBO jr. flyweight title against Nietes, the former WBO strawweight title holder. Both Nietes and Hirales have porous defenses and like to let their hands go. This one should be good while it lasts.

McCloskey and Prescott both have shared the ring with current unified jr. welterweight champion, Amir Khan. McCloskey was shutout en route to a 6-round technical decision loss, while Prescott knocked then-lightweight prospect Amir Khan senseless in less than 1 round in 2008. This will be the awkward McCloskey’s first bout since the loss to Khan in April. The rangy Prescott has had his share of ups and downs since the win over Khan, dropping 2 straight in 2009, but getting back on track in his last 3. The winner will be named the number 1 contender for Khan’s WBA strap and will get a second crack at the champ should he continue to campaign in the 140-pound division. Broadcast details have not been released yet, but there is a chance this bout could wind up televised in the UK.

Hopkins set a record in May by becoming the oldest boxer to win a major world title. He will now defend his title against a younger, fresher fighter in Chad Dawson. Hopkins is the epitome of what is called a “student of the game”. Despite his age and deteriorated athleticism he has used distance, timing, a sneaky lead right hand, and some tricks learned throughout the course of his 23-year career to rack up big wins in the twilight of his career. Dawson is now under the tutelage of Emanuel Steward, who has turned Dawson into a jab-heavy fighter who uses his height to his advantage. Some turn their noses up at the tacticians of the sport, but purists should enjoy watching the Benjamin Button of boxing attempt to outsmart and outwit a man 17 years younger.

Showtime’s Super Six World Boxing Classic will come to a conclusion after 2 years. Early underdogs Ward and Froch came in to little expectations and have proven to the world that they belonged atop the deep and talented 168-pound division. Ward is like a younger and faster Bernard Hopkins. His athleticism is overshadowed by his dogged determination and willingness to fight in close quarters. Froch is the noted brawler that has improved with each fight in the tournament. The winner will walk away with the tournament trophy, the WBA and WBC super middleweight titles, and IBF super middleweight champion Lucian Bute waiting in the wings.

You can send Tim your questions and comments at timharrison65@gmail.com. You can also follow him on Twitter at www.twitter.com/TheTimHarrison, and find him on Facebook where douchenozzles and jock-sniffing writers can’t accept his (sometimes) differing opinions, at www.facebook.com/officialtimharrison.