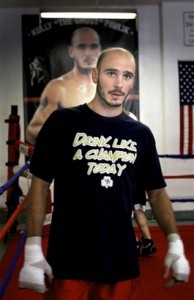 Former middleweight champion, Kelly Pavlik, has pulled out of this Saturday’s Showtime bout with Darryl Cunningham, forcing the televised ShoBox special as well as the live card at the Covelli Centre in Youngstown, OH to be cancelled.

It has been reported that Pavlik and his team were unhappy about the money guaranteed by his promoter, Top Rank, for a pending bout with IBF super middleweight champ, Lucian Bute.

“Top Rank is very disappointed at Kelly’s sudden decision to discontinue the rebuilding of his boxing career,” said Todd duBoef, president of Top Rank, in a statement to the media. “Kelly’s team specifically outlined a strategy for Kelly to return to the ring in an effective fashion. Kelly’s team gave us their objectives and we set them on a course, which began last May with Kelly’s fight against Alfonso Lopez and was to continue on Saturday against Darryl Cunningham. It seems Kelly has derailed this plan.”

Pavlik was working to rebuild a career derailed by two high-profile losses (to Bernard Hopkins and Sergio Martinez), a staph infection, and a widely-reported stint in rehab for alcohol abuse.