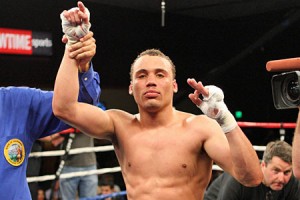 “This was a triumph. I’m making a note here: huge success.” Or so sang Ellen McLain as GLaDOS in the ending credits for the video game Portal. For Vernon Paris (25-0, 15 KOs), it’s hard to overstate his satisfaction after a seventh-round TKO victory over Tim Coleman (19-2-1, 5 KOs) for a minor belt and consideration in the IBF junior welterweight rankings on ESPN2’s Friday Night Fights series. In the process, Paris settled one hell of a grudge; these two fighters just flat out didn’t like each other coming into the contest.

The fight itself was, in hindsight, predictable. Coleman’s five knockouts, only one of which came against even a fringe contender (a third-round stoppage of Patrick Lopez last year), betrayed his very light touch in the ring. From the beginning, it was a question of whether the IBF’s #5 ranked contender would be able to keep Paris off him and force Paris to respect Coleman’s power enough not to reach in and try to make an attacking fight out of it.

In the second round, a solid counter led to a flash knockdown and a 10-8 round for Coleman, but that was as far as he was able to go in trying to control the pace of the fight. By round five, Paris had figured Coleman out and came with an assault of hooks to the body that did to Coleman’s liver with punches what Kelly Pavlik does to his own liver with alcohol. Coleman went down twice in the sixth in what the viewer could’ve been forgiven for thinking was an instant replay and not two separate shots, then the end came early in the seventh on yet another carbon-copy left hook to the liver. Coleman said before the fight that he literally wanted to kill Paris in the ring, but Paris was the one singing “we do what we must because we can” by the end of the fight. Still undefeated and looking very much like a title contender with those fierce body punches, this may prove to be a big-time springboard for Vernon Paris’ career.

The co-feature was an intriguing matchup marred by rotten refereeing and enough blood to question the wisdom of broadcasting boxing in 3D. For those in the audience still wiping Rob Frankel’s blood off their 3D glasses from the John Molina fight, now they have the blood of Cristobal Cruz (39-12-3, 23 KOs) to deal with as well. Against Art Hovhannesyan (14-0-2, 8 KOs), Cruz came out very tentative, showing his 15 month layoff and ring rust. However, Cruz won rounds two and three convincingly before a clash of heads in round four caused the fight to be stopped by referee Raul Caiz Sr. and the fight to go to the judges’ scorecards.

Here we see another case of doing damage to the liver, as judge Gwen Adair submitted the kind of card (39-37 for Hovhannesyan) that makes this writer wonder if she wasn’t drunker than Pavlik on St. Patrick’s Day. That was a completely indefensible score. The other two judges had the fight 39-37 for Cruz and 38-38, leading to a split draw. The Boxing Tribune had the fight 39-37 for Cruz, and the argument could be made for the Armenian winning the fourth round before the stoppage, but rounds two and three were clear, obvious, easy to score rounds. How either one of those rounds could possibly have been given to Hovhannesyan is something Ms. Adair should have to explain to the California commission before she is allowed to judge a fight again.

Dishonorable mention should also go to Raul Caiz Sr., who did something a referee should know better than to do. At several points he inserted himself into the action, even giving a full fifteen-second lecture to Hovhannesyan in the first round, taking time off the clock and disrupting the flow of the fight. Caiz should know that fans do not come to watch referees; break the fighters, give a hand signal warning, and get the hell out of the way. Also, his failure to control the fight (even despite all of his interference) may very well have led to the clash of heads in the first place—at any rate, at no point did Raul Caiz look in any way in control of the action in the ring. It is not often that a father-son tandem in refereeing involves the son being a better referee than his father (Arthur Mercante Jr., I’m looking at you with Bee Scottland’s blood on your hands and your father’s legacy tarnished), but Raul Caiz Jr. is a far better referee than his old man.

For the first sideshow attraction after the early stoppage in the co-feature, we saw unbeaten prospect Mike “Baby Face” Faragon (16-0, 7 KOs) in against a severely overmatched Ira Terry (24-6, 14 KOs.) Faragon showed some impressive technique to the body, hurting Terry with vicious shots downstairs and making short work of his opponent, stopping Terry on a body shot in the second round of the fight. Terry may end up making people think he’s Muslim tomorrow, as after a stomach-crunching shot like the ones he took tonight, he won’t be eating from sunup to sundown—perfect for the holy month of Ramadan currently underway.

Finally, a four-rounder closed the show, as Ricardo Cubias (0-1) made his pro debut against Sergio Nunez (3-0-1, 2 KOs) and got the holy hell beaten out of him for four rounds. Wide, looping punches, poor defense, and Nunez’s own talents made this one a very lopsided beating, and it is either a knock on Nunez’s punching power or a sign that Cubias has a granite chin that it went the full four rounds. All three judges plus this writer plus anyone with better eyesight than Stevie Wonder had this one 40-36 for the still-unbeaten Nunez. Welcome to the pros, Senor Cubias. Next time, try not flailing your arms around like the robot from Lost in Space if you want to win a professional fight.

On the TV side of things, a tip of the hat to Sergio Mora who, while he is no Teddy Atlas, acquitted himself well as a color commentator. Good commentary can make televised boxing more enjoyable to watch and should be pointed out when it comes. Teddy is in Russia training Alexander Povetkin for his fight against Ruslan Chagaev for the WBA junkyard scrap metal relic left open by Wladimir Klitschko’s elevation to “super champion”. Who else ESPN2 will roll out for their last two televised fight cards of the season remains to be seen.

Fox Doucette covers Friday Night Fights for The Boxing Tribune. His column, The Southpaw, appears on Thursdays. Fan mail, hate mail, and Weighted Companion Cubes can be sent to beatcap@gmail.com.