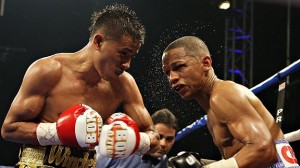 In boxing, there is a tendency to believe that bigger is better, both in terms of the pay-per-view buys and in terms of the size of the fighters. Heavyweight has long been boxing’s glamour division, and the two men reigning atop the division are gigantic Ivan Drago types, products of the old Soviet system and its post-Soviet infrastructure in the 1980s and ’90s. Indeed, anyone below 140 pounds (where Amir Khan beat Zab Judah last month) has had a hard time getting noticed by any but the most hardcore fight fans.

Indeed, this pattern continues the lower on the scale you go; even hardcore fans have a hard time naming a lot of fighters not named Nonito Donaire or Pongsaklek Wonjongkam once you drop below the featherweight division. In the old-school eight, it is easy to forget flyweight and bantamweight, as there is an equal part shortage of American fighters (most of the best at this level are from Southeast Asia or are young Mexican fighters who still have not even fully grown up) and tendency to dismiss someone who looks more like the fan’s twelve-year-old son than a professional boxer in stature.

Nonetheless, there is a big fight at bantamweight this Saturday, the result of a mini-tournament held by the IBF to determine its 118-pound champion. Joseph Agbeko (28-2, 22 KOs), all 5’5” of him, takes on Abner Mares (21-0-1, 13 KOs), also standing 65 inches from the ground, for the right to be called the best 118-pound fighter outside of the Philippines (from whence comes Nonito Donaire). It is a rare showcase on major television (Showtime is carrying the fight in the United States) at such a low weight class.

In honor of this fight, here’s six more guys (in no particular order) you need to keep an eye on at 118 pounds or below—besides Donaire, Wonjongkam, and Saturday night’s combatants, this will complete a top ten of sorts:

Segura captured the Ring Magazine title at 108 pounds with a spectacular body shot that dropped Ivan Calderon in their second contest this past April. The Mexican works downstairs with a ferocity that makes the observer think he could fight featherweights and carry enough power in his punches to overcome the weight disadvantage. Segura-Calderon I was last year’s Ring Magazine Fight of the Year, and if pound-for-pound rankings are weighted to truly mean “pound for pound” then Segura, who weighed in at 108 for that first battle, should be higher in people’s rankings than he is. Blame that tendency for mainstream writers to forget that there are fighters out there lighter than a supermodel.

Strawweight, mini-flyweight, minimumweight, whatever you call the division for boxing’s smallest fighters, Joyi has broken what has historically been the province of Japanese and Southeast Asian boxers and brought the IBF title to South Africa. Joyi is an all-action fighter who has been compared to an internal combustion engine by several writers, noting his tendency to move his hands like pistons in a relentless pressure style. This was on display when Joyi won a wide unanimous decision victory both in his IBF title eliminator against Florante Condes and then again with a similar result against Raul Garcia to capture the title in March 2010. Joyi is a prime example of the inverse relationship between weight and punching volume in the fight game.

The “Hawaiian Punch”, an American of Philippine descent, Viloria has been at the fight game longer than many of his rivals at the 108 and 112-pound divisions. While many (including Manny Pacquiao) start out at these miniature-fighter weight classes before seeking their fortune at anywhere from feather to welterweight, Viloria has stayed two pounds either side of 110, although it must be noted that flyweight seems his natural size. The current WBO flyweight titlist, ranked #6 at that division by Ring Magazine, and still undefeated at any fight contested above the 108-pound limit (he is 4-3 at 108 and 25-0 above it) can give anyone at 112 pounds all they can handle.

The other fighter at 118 that people ought to be talking about, Moreno holds the WBA “super” championship at bantamweight after holding the regular title since May of 2008. Moreno may not have tremendous knockout power, but his boxing ability carries the day on the scorecards. Moreno is also a lightning rod for controversy when the results are announced; four of his title defenses have been split-decision wins, and when he does not win by knockout, it can be a fight fan’s debating dream. Moreno makes competitive fights, and so far (with the lone loss being a four-round split decision early in his career) he wins them.

Narvaez has been so good for so long that he can make a fine case for being the best fighter you’ve never heard of. The Argentine has been a champion since beating Adonis Rivas for the WBO flyweight title way back in July of 2002 and moved up in weight last year to capture the vacant WBO 115-pound title at the expense of Everth Briceno. Almost all of Narvaez’s fights have been in his native Argentina, which is a lot of the reason why almost no Americans know who he is; it is not as though there is no appetite for Argentine fighters stateside (Carlos Monzon in the past and Marcos Maidana and Sergio Martinez in the present see to that). A unification bout against WBC champ Tomas Rojas or WBA titlist Hugo Cazares, both Mexican fighters, held in a place like Los Angeles or San Antonio, could bring a sizeable Latino crowd and get the veteran champion’s name on the American boxing map.

If indeed Giovani Segura is looking to move up to a higher weight class, Hernandez, of Mexico, is the 108-pound heir apparent. Hernandez beat Gilberto Keb Baas into a pulp in their battle for the WBC 108-pound strap in April, and scarcely two weeks from now Hernandez looks to defend that title for the first time in Mexico City against Gideon Buthelezi. Fans of the mighty mites should find a way to watch that battle, since it promises to be a showcase of the Ring Magazine #1 contender’s skills against an inexperienced (12-2, 4 KOs) opponent with a questionable chin (Buthelezi was knocked out by a local fighter for the South African strawweight title in 2008.)

Sure, there’s plenty of enjoyment to be found at junior welterweight and super middleweight and light heavyweight, but don’t gloss over the mighty mites; at 118 and below there are plenty of great fighters who are worth watching if you’re willing to do the legwork to track their fights down on the wonderful world of the Internet. Kudos to Showtime for letting the bantamweights have their day in the sun with the recent four-man tournament that concludes this Saturday with Agbeko-Mares.

Fox Doucette covers Friday Night Fights for The Boxing Tribune. His weekly column, The Southpaw, appears on Thursdays. Fan mail, hate mail, and “these guys are smaller than my girlfriend and she’s pretty small!” can be sent to beatcap@gmail.com.