True story: I had a final exam scheduled for 5:30 PM on May 6th in my tax accounting class. I leaned on the professo 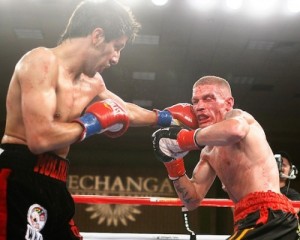 r to let me reschedule due to a pre-existing conflict and said “Let me put it this way: the words ‘Friday Night’ appear in my job description.” Incredulous, the professor wanted some measure of proof and I said “You’ve got a computer. Go to theboxingtribune.com and look at the byline on the FNF recap.” So while a room full of poor suckers did taxes for two hours, your friendly neighborhood commentator watched Diego Magdaleno beat the hell out of Gilberto Sanchez-Leon and yapped on Facebook to fans of the ESPN FNF page. (I got to take the final earlier in the day…and got an A on it. Hell yeah.)

All this is by way of saying I’ve got the greatest job in the world, the classic “get paid to do something you previously did purely for love of the game” job. With my first season at the helm of the Tribune’s FNF coverage drawing to a close tomorrow night, it’s time to hand out the year-end awards with the caveat that tomorrow night’s finale may make a monkey out of me.

Boxing is at its very best when it is two guys letting their hands go, beating each other senseless in an evenly matched war that gets the fans out of their seats yelling in a primal manner that distills the popularity of combat sports down to its barest essence. Look back on past Fights of the Year and you see action fighters like Micky Ward and Arturo Gatti (against each other and against other fighters), the Erik Morales-Marco Antonio Barrera fights, the wars between Israel Vazquez and Rafael Marquez…as much as boxing purists claim to love defensive fighters like Floyd Mayweather and Andre Ward, what keeps us coming back is these sorts of brutal slugfests that we talk about over brews and fried food at the pub.

Wolak started out pressing Rodriguez on the inside, taking away Delvin’s boxing ability that would usually put him in the category of a Mayweather or an Andre Ward rather than an Arturo Gatti or Micky Ward and forcing Rodriguez, the memories of decision robberies past surely haunting him, to engage in Wolak’s fight. For the first four rounds it looked like the Pole’s strategy would pay off in time…until a hematoma that made Hasim Rahman’s mouse in the Holyfield fight look like a mosquito bite left Wolak blind in one eye and grotesque in appearance.

Give credit to referee Steve Smoger who, instead of stopping the fight, said “It’s ugly, but I don’t mind” and let this one continue to a thrilling finish that just screams for a rematch. And give credit to Wolak—he could’ve punked out, stolen a technical-decision win (he was up on the scorecards at the point where he would’ve plausibly been able to claim he couldn’t see), and moved on with his career. A FotY is made possible by the fighters, and this was no different.

Some great KOs are defined by one monster punch that ends up going viral on YouTube or making highlight reels on SportsCenter. This was not such an occasion. This was a different kind of knockout, a pure exercise in psychological domination that led me, in my recap that night, to compare it to Muhammad Ali-Ernie Terrell. This was boxing’s equivalent of Private Pyle getting repeatedly humiliated in the first half of Full Metal Jacket, a demolition of the mind as well as the body.

Lujan, who took the fight on short notice, staked a top-six ranking in three major alphabet soup organizations on the result of the contest. As Teddy Atlas pointed out, “why take this fight on short notice unless Lujan has no respect for his opponent, unless he’s not afraid of him?” Atlas said this in the third round…and by the sixth it was prophetic. Every time Melligen hit Lujan with his best shot, the Argentine shrugged and laughed it off as if to say “you’re a joke, you don’t belong in the same ring with me.” Once Lujan had his opponent rattled, a knockdown in each of the sixth, seventh, and eighth rounds had Melligen in the kind of submissive pose you expect from a scolded puppy, not a professional fighter. The coup de grace in the ninth seemed more a mercy killing than a display of pure punching power, and all who watched it came away thinking “what a brutal, sadistic beatdown.” It wasn’t the spectacular one-punch knockout that we got from, say, Kendall Holt’s win over Julio Diaz. It was far, far more violent than that…which is why it’s my KO of the Year.

FIGHTER OF THE YEAR: Carlos Molina

Talk about using the power of television. Carlos Molina, a journeyman at best when the year began, started his remarkable rise on March 25th by fighting Erislandy Lara to a draw in a fight that many thought Molina won (indeed, it may have been the boxing gods getting even with Lara with that robbery in the Paul Williams fight). He then earned a second look on TV against Allen Conyers at the end of April, knocking Conyers out and using that as a springboard to his fight against Kermit Cintron (a wide unanimous decision win).

Molina is now ranked #6 at junior middleweight by Ring Magazine, and the five guys ahead of him are Miguel Cotto, Alfredo Angulo, Saul Alvarez, Vanes Martirosyan, and Erislandy Lara. Talk about “just outside the discussion” of the elite fighters…Molina kicked his career into overdrive and Friday Night Fights made it possible. That makes him Fighter of the Year for sure.

This one was amplified when Herrera won another very questionable decision against Mike Dallas Jr. a few months later. Herrera moves his hands but he simply does not land solid, convincing punches, and Provodnikov beat him into a battered, bruised, beaten fighter for twelve solid rounds—Herrera had swelling so bad that his left eye was swollen shut by the Russian’s barrage. Teddy Atlas had this 116-112 for Provodnikov, my card had it 117-111, but the judges? 116-112 (twice), 115-113 for Herrera. You’ve got to be kidding me. Herrera must have some magic fairy dust in his punches that makes judges think they landed and did damage when they hit elbows. That fight was a travesty.

There’s no way to sugarcoat this—this fight was an absolute snoozefest from bell to bell. Adjaho thought potshotting on the outside counted as offense, Julio refused to close distance and engage his opponent, the punches had all the power of a pair of toddlers hitting each other, and this went on for ten rounds of boos, catcalls, and sawing Zs from the audience. If we never see either of these guys on television again, it’ll be too soon. This fight sucked and both fighters should be ashamed of themselves—you’re on TV, make with the punching.

TEDDY ATLAS QUOTE OF THE YEAR:

“Everybody tells you milk is good, y’know, builds the bones…but sometimes it can be bad. You have it at the wrong time, with the wrong meal, and next thing you know, indigestion, you get a little nausea or something. Same thing with the jab.” – during round 2 of the Daniel Edouard-Peter Manfredo Jr. fight, January 14th. Only you, Teddy…only you.

JOE TESSITORE QUOTE OF THE YEAR:

“Blood everywhere, blood on tissues, on my hand, on my suit, this is why my dry cleaner thinks I’m a hit man…I’ve got more DNA on me than in most labs.” – after the fourth round of John Molina vs. Rob Frankel, when Frankel’s face looked like he’d been in a knife fight, June 24th.

What a year. In thirteen years of the FNF series on ESPN2, you can make a fine case that this was the best year of all, and it wraps up tomorrow night. It’s been a pleasure to cover it and I’ll be back in 2012 to do it all again. Meanwhile, stay tuned every Thursday for The Southpaw, the sharpest commentary on the Sweet Science out there, right here on The Boxing Tribune.

Fox Doucette covers Friday Night Fights for The Boxing Tribune. His weekly column, The Southpaw, appears on Thursdays. Fan mail, hate mail, and disputes of anything on this list can be sent to beatcap@gmail.com.