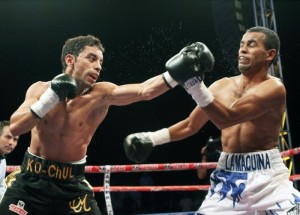 After two rounds of feeling out his wide-swinging opponent, the former three-division world champ, Montiel, ended the bout mid-way through the third with a sweeping left hook that sent Perez to the canvas for the full ten count.