As the summer drags on and we find ourselves in a bit of a slow period for the sweet science, now is as good of a time as any to look ahead at some potential match-ups that at least one boxing scribe is hoping take place in the near future.  So without any further wasting of your time, here are three of my dream fights for the next year in boxing.

Saul Alvarez (37-0-1, 27 KOs) has quickly become the darling of Mexican boxing over the course of his young career. 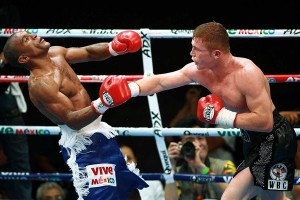 Since surviving a shaky start to his American debut on the Floyd Mayweather-Shane Mosley undercard, Canelo has dominated his last five opponents, hardly losing a round in the process.  He has successfully blown through faded “name” fighters (Carlos Baldomir and Lovemore Ndou) and veteran “gatekeeper” types (Matthew Hatton and Ryan Rhodes) but has yet to face an opponent that could be classified as truly fearsome.  Until he gets in the ring with that type of powerful force, the type of fighter that is really a threat to hurt him with any given punch, many in the boxing community will remain skeptical.

Enter Alfredo Angulo.  Angulo (20-1-0, 17 KOs) is one of those guys in boxing that can give even the most hardened veterans nightmares.  With one punch KO power, relentless aggression, and underrated skills, Perro has a reputation for being as tenacious and intimidating as the pit bulls that often accompany him into the ring.

The WBC has already shown some interest in this fight, requesting that Angulo fight in an eliminator for the right to challenge for Alvarez’s 154 pound strap.  If they can get this to happen, they can win back some of the fans still bitter at many of their recent controversial decisions.  This fight between two young guys, both aggressive entertaining boxers, could be an instant classic.

Boxing’s combination of Yoda and Methuselah, Bernard Hopkins has operated as a wise old master during the twilight of his career, embarrassing younger, less intelligent fighters who have at times underestimated the 46-year-old pugilist.

Hopkins (52-5-2, 32 KOs) has used his counter-punching skills to confuse and intimidate lesser men, causing them to second guess themselves and tricking them into fighting at a slower pace that his aging body can still handle.  I fully expect that he will find a way to win his next bout, against former champion Chad Dawson, using this same formula.  What it will take to beat him is a young, strong, determined fighter who is willing to take his shots in order to land some of their own.

Tavoris Cloud (23-0-0, 19 KOs) is exactly that type of fighter.  While Cloud is still somewhat crude and simplistic in his approach, something Hopkins will exploit, he is also strong willed enough to walk through some shots in order to get to his man.  What happens when Hopkins times him perfectly, but simply isn’t able to hurt him?  Will Bernard finally wilt under the pressure of a stronger, younger man if that man has the fortitude to bring the fight to him?  This just might be the kind of opponent that could finally send the living legend into retirement.

Ever since his upset knockout of Vic Darchinyan, Nonito Donaire (26-1-0, 18 KOs) has been seen as somewhat of a phenom in the world of professional boxing.  With a preternatural combination of strength and speed, Donaire has annihilated most of his opponents since Darchinyan, including putting what seemed to be a visible dent in the skull of respected belt holder Fernando Montiel with a hellacious left hook in his last bout.

It is going to take a very unique challenger to unseat Donaire, and as deep as the 118 pound division seems to be, I sincerely doubt that challenger exists at bantamweight.  One weight class above Donaire at 122 pounds, however, sits a man that may just be that type of unique challenge.

Guillermo Rigondeaux (8-0-0, 6 KOs) may lack big fight experience in the professional ranks, but make no mistake; this is a man who has been through a lot in the world of boxing.  A two-time Olympic gold medalist and one of the greatest amateur fighters in history, Rigondeaux has a one-of-a-kind skill set.  Out of his southpaw stance “The Jackal” can throw every punch in the book with authority, and while not the freak athlete that Donaire is, has a fair amount of natural speed and power himself.

While Donaire would likely be a healthy favorite against anybody in his realm, Rigondeaux could present the type of intriguing challenge that the hardcore boxing heads go nuts over.