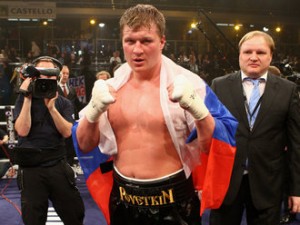 Before the ninth round, Povetkin trainer, Teddy Atlas, used Povetkin’s recently deceased father as motivation for his fighter, who seemed gassed after eight. Atlas closed the one-minute rest period, urging his fighter to become a champion, so the world can see “Mr. Povetkin’s son, the world champion.”

From the ninth round on, Povetkin regained the control he enjoyed in the first five rounds, letting his hands go and finishing ahead on all three judges’ scorecards. The Boxing Tribune scored the fight 117-111 for Povetkin.

On the undercard, Robert Helenius (16-0, 11 KOs) stopped former WBO heavyweight titlist, Siarhei Liakhovich (25-4, 16 KOs) in the ninth round of their scheduled twelve.

A relatively even fight through seven, Helenius’ heavy-handed shots slowly began taking their toll on Liakhovich, who was sent to the canvas at the end of the eighth round with several hard shots.

The former titlist came out throwing in the ninth, but was stopped in his tracks by a monstrous Helenius uppercut. Out on his feet, Liakhovich absorbed several more thudding blows before the referee stepped in to wave off the bout.