As Floyd Mayweather Jr. brings himself back into the forefront of boxing dialogue with his 24/7 series 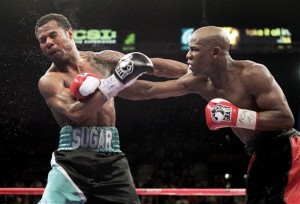 and his fall fight with Victor Ortiz, now is as good of a time as any to take a good honest look at Mayweather’s legacy, or perhaps more to the point of this article, the way his legacy is popularly perceived.  This shouldn’t be anything revolutionary as a piece, but I find as I’m writing it I have a hard time remembering many actual honest assessments of Mayweather’s accomplishments.  What we get instead is repeated clichés about how Floyd is a punk who is “scared” to face tough opponents.  Unfortunately, this isn’t just a phenomenon common to bloggers, but one that is embraced by even some of the most mainstream members of the boxing media.

Now before anyone is going to compare Floyd to the Ray Robinsons of the world, there is a huge nostalgic prejudice in boxing that has to be overcome.  As long as boxing has been around people have been saying “fighters today stink compared to guys in my generation.”  Floyd could beat Manny Pacquiao and Sergio Martinez on the same night and plenty of older fans will still say he wouldn’t get out of the first round with Tommy Hearns.  So in going into this, let me say that I don’t mean to disrespect anybody’s favorite fighters, or to say that Floyd is head and shoulders above the greats of past eras, but merely to look at the double standard by which he is unfairly judged when it comes to his place in history.

Let’s start with one of the Mayweather performances that many fans were the most critical of, his 2009 fight with Juan Manuel Marquez.  The common view of this fight is that Mayweather was unfairly “picking on” a smaller guy, and deserves more scorn than praise for his nearly flawless performance.  ESPN.com even published stories with headlines like “What, no knockout?” bashing Mayweather’s virtual shut-out on the grounds that he didn’t stop Marquez.  This is sort of a side-note, but of course it is about as ridiculous as mocking a team that wins the super bowl by 40 points for not winning by 50.

What boxing history actually tells us though, is that smaller fighters have been moving up in weight for as long as weight classes have existed, and very few times has a man as skilled as Marquez ever been beaten so thoroughly.  Duran defeated a much bigger Leonard, Mosley moved up from lightweight and beat De La Hoya.  Even the great Sugar Ray Robinson (who judging by the way many people talk about him today, actually walked on water on his way to the ring) lost his middleweight title to Carmen Basillio, who moved up from welterweight, weighed in at 153 pounds to Robinson’s 160, and gave up five inches of height.

So if we know that countless times in boxing history, smaller men have beaten larger men, why do we treat Mayweather’s shellacking of Marquez as if it was the only possible outcome?  I suspect there are two reasons for this.  First, Floyd initially said he would fight Marquez at 144 pounds and then the week of the fight changed the contract to 146.  This type of unprofessional, self-centered behavior is one of the main reasons Floyd’s legacy is denied due credit. People have trouble looking past his antics and judging him as a fighter.  Secondly, if you already don’t like Floyd based on his personality, the truth of the Marquez fight is very hard to swallow.  Mayweather was not only bigger; he was on a totally different level in terms of skill and athletic ability.  When considering that most experts rated Marquez as one of the top pound-for-pound fighters in the world, to admit that Mayweather was THAT much better than him is to give Floyd more credit than most people are comfortable with.  Unfortunately, history doesn’t conform to what people are comfortable with, and the fact of the matter is that Mayweather is a far superior fighter to even a hall of famer like Marquez, regardless of size.

One could go through most of Floyd’s high profile wins and find similar discrepancies in fact and boxing writer rhetoric.  When he fought much larger men like Diego Corrales and Jose Luis Castillo, Corrales was “distracted” and “weight drained” and Castillo was “robbed” by the judges.

Ricky Hatton was never any good, many in boxing would have you know, despite the fact that he was an undefeated multidivisional titlist and linear world champion who had pounded future hall of famer Kostya Tszyu into retirement.  In fact, it has been said far too many times that Mayweather “ducked” Tszyu, despite the fact that he fought the man who conquered the Russian great.

Shane Mosley, of course, was far too old to beat Mayweather.  The fact that he was almost unanimously ranked as the best welterweight and the third best fighter in the world, pound for pound, going into their fight is irrelevant.  If a fact makes Mayweather look good, it cannot be valid.  It was quite the amusing bit of backtracking to see journalists who assured us that Floyd was afraid of Mosley and that he would fight lightly-regarded Matt Hatton instead, change their tune and say that Shane was never a legit opponent to begin with after Floyd dominated him.

Floyd doesn’t fight young, strong, opponents; another rallying cry for the anti-Mayweather crew goes.  When first rumors of a Victor Ortiz fight surfaced, many in the boxing media downplayed them and continued to pass around ridiculous reports that Floyd would instead fight Paul Spadafora, a virtual nobody.  Now after saying how Ortiz was too big of a risk for Mayweather, the same crowd has turned around and started spouting off how Ortiz isn’t any good either.

What is true about Mayweather in terms of historical comparisons is that many old time fighters were far more active.  However, activity is not always a good thing.  Ray Robinson fought numerous opponents who were complete novices or had nearly even if not losing records.  Imagine the outcry if Floyd wanted to fight somebody like Benny Evans, who had a 33-36-5 record going into his fight with a prime Robinson in 1949, or Freddie Flores, who was 21-38-10 when Robinson fought him the same year.  I dare say fighters like those two make Hatton and Mosley look like, well, Ray Robinson.

Now, this of course is not to bash Robinson, who is maybe the best boxer to ever live.  The point is just to illustrate that he took fights based on what opportunities were in front of him and what the culture of the sport was like at that time, the same thing Floyd is doing.

Activity is not universal to hall of fame fighters though.  Ray Leonard is another all-time great that many would consider on a different level from Mayweather.  The truth is, however, that Leonard was a master of the exact same kind of antics that Mayweather is accused of, specifically “retiring” for long periods of time rather than give fans the bouts they wanted.  Remember how awesome that Leonard-Aaron Pryor fight was?  Oh yeah, Leonard refused to get in the ring with him despite being chased around the country by a begging Pryor for years.  Many have said that that Floyd waited for Mosley to get older before taking him on, and is doing the same to Pacquiao.  Wouldn’t you have to then say the same thing about the way Leonard handled his bout with Marvin Hagler?

The saddest part of all this is not that Floyd isn’t getting his credit, as he has already given himself more credit than he could ever earn, and as he sits in his mansion eating ravioli with 50 cent, I doubt he’s worried about what the boxing media is thinking of him.  The tragic element is how disrespectful it is to the sport of boxing to pretend that Mayweather’s opponents aren’t any good.  If you disrespect guys like Mosley, Marquez, and De La Hoya, you are disrespecting the sport itself, as these guys are surefire hall of famers that could have competed in any era.

As long as Floyd’s winning streak continues, the excuses about his opponents will be there.  If he ever beats Pacquiao, it will be because Manny was too small, if he ever beats Martinez it will be because Sergio was the overrated king of a mediocre division.  Fortunately for Mayweather, he doesn’t have to worry about playing that game.  A man who never loses doesn’t need excuses.