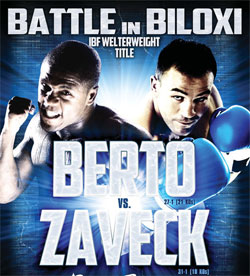 as he challenges IBF welterweight champion Jan Zaveck (31-1, 18 KOs). The bout will be televised by HBO and will be held at the Beau Rivage Resort and Casino in Biloxi, Mississippi.

Berto’s title reign began in June 2008, when he knocked out Miguel Angel Rodriguez to win the title vacated when Floyd Mayweather took a hiatus from the sport. His title defenses over Steve Forbes, Luis Collazo, Juan Urango, Carlos Quintana, and Freddy Hernandez did little to win over boxing fans. In his last bout Berto suffered his first career loss to Victor Ortiz in an exciting back-and-forth battle that saw both men taste the canvas. Berto is looking to become a two-time welterweight champion and get back on track for a big payday against one of boxing’s cash cows.

Zaveck, a native of Slovenia who has fought most of his career in Germany, will be making his first appearance on American soil. Zaveck is no stranger to fighting in enemy territory. In 2009 he traveled to South Africa and knocked out Isaac Hlatshwayo to take the IBF title. After an easy defense against Rodolfo Martinez, Zaveck scored a majority decision victory over Rafal Jackiewicz in Slovenia. In his last bout, Zaveck knocked out American journeyman Paul Delgado in 5 rounds.