This Saturday afternoon, Tomasz Adamek will look to topple the giant Vitali Klitschko in front of 40,000 plus Polish supporters.  The 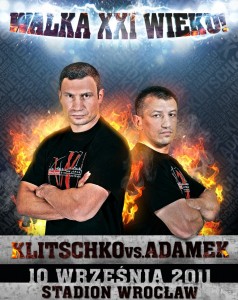 former cruiserweight champ has steadily fought bigger and bigger heavyweights en route to this showdown.  Adamek firmly believes he has the stuff to topple a Klitschko.  He believes his speed and skill set will allow him to be David taking down Goliath.

Meanwhile, since returning to the sport in 2008 following an injury produced retirement, Vitali Klitschko has simply destroyed everyone in front of him.  He has knocked out five of his seven oppoennts in that time and arguably has not lost a round in any of these fights.

So does Adamek truly have a chance to take Vitali’s WBC belt or is he just simply another inferior challenger to a superior champion.  Let’s take a look into the specifics to break down Klitschko vs. Adamek.

Boxing ability: Both heavy’s have vastly underrated boxing skills.  Klitschko is more known for his size and heavy hands while Adamek is known for his grit and toughness.  Klitschko uses that size with serious skill by being an awkward boxer that controls range with the long jab and heavy right hand for power.  It may not look pretty but Klitschko is incredibly effective at fighting on his terms no matter what his opponent brings to the ring.  Adamek has transformed from a cruiserweight brawler to a heavyweight boxer.  The small heavyweight uses his speed advantage and good movement to get inside of bigger opponents without taking punishment getting in and out.

Physical: Both men take conditioning and training very serious.  Both apply themselves year round to their craft.  Both will come to the ring in perfect fighting condition ready with stamina to fight hard for twelve rounds.  Adamek gets a slight advantage being younger.

Power: Adamek was powerful south of 200lbs.  Since going to the land of giants Adamek can do damage, but is certainly not a knockout puncher.  Vitali sports one of the best KO percentages of all time at 88%.  The clear advantage in power goes to the champ.  He is the one who has a legitimate shot of walking away in less than 12 rounds with the victory.  Vitali’s jab has the power of many fighters cross and he fires it accurately for 12 rounds to soften his opponent.  His straight right is devastating and stopped many an opponent.  To top it off Klitschko is a true finisher.  Once his opponent is in trouble he is one of the best at finishing his man.

Speed: This is Adamek’s one true advantage against the giant.  Adamek had decent speed at cruiser, but compared to heavyweights he is a fast handed quick moving fighter.  His speed and movement is subtle and often surprises his heavyweight opponents.  Michael Grant and Kevin McBride stated after fighting Adamek they thought they could lean on him to use size but simply could not get to the smaller, faster man.  Under the teaching of trainer Roger Bloodworth Adamek has maximized his speed with better footwork, balance, and head movement.

Defense: Vitali’s long awkward style is his first defense and make no mistake, it is effective.  Many an opponent has entered the ring thinking they could outbox the older Klitschko or simply bull rush the less athletic brother.  It simply does not work.  Other than when Vitali fought Lennox Lewis who was nearly equal in size he has taken very few punches.  Chris Arreola tried for ten rounds to walk down Klitschko but could never get around his long punches and surprisingly solid footwork.  Adamek used his concrete dome as his defense south of 200lbs but that won’t work against the big men.  Since going up to heavyweight Adamek has added some slick movement to his game and his speed serves as his defense as well.

Chin: Both combatants are known for having iron chins and the huge heart that is expected from boxers.  Adamek has never been stopped.  Klitschko has two stoppage losses but one was from a hurt shoulder and the second was due to his face being an extreme bloody mess against Lennox Lewis (despite that mess Klitschko was outraged when he was not allowed to continue).  Adamek has a great chin and is as tough as they come, but there is no way of knowing if your beard will hold up to a Klitschko until you absorb that hammer a few times.  Vitali on the other hand has absorbed shots from much harder hitting punchers than the Polish hero without blinking.  Again Klitschko has the decided advantage.

Wear and Tear: Both fighters have miles on them.  Vitali is forty years old and while he has been dominant eventually age will catch you.  Against Solis while it only went one odd round Solis touched Vitali far easier than anyone has since his return in 2008.  Adamek has been in some serious wars but has maintained his athletic skills.  The slight advantage goes to Adamek considering this could be the day father time catches Vitali.

Intangibles: This fight has one obvious X-factor and that is size.  Vitali will have six inches on Tomasz and probably around thirty to thirty five pounds.  Klitschko is a master at using that size to his advantage.  To pull the giant upset Adamek will have to do what no one else has been able to do, find a way to counter that size.

Prediction: Part of me wants to go out on a limb and say Adamek will pull the upset.  Maybe it was that one round Vitali had against Solis where the Cuban was able to jump inside and touch Vitali. Maybe that made me believe that Vitali finally got old.  Possibly it is the little fan inside me I try to tuck away as a professional non-partisan writer that is screaming for new blood and excitement in the heavyweight division.  I can make the argument that Adamek can win.  He has as good of shot as anyone.  He has a significant speed for a heavyweight, the trainer to provide the game plan, and the discipline/skills to execute the game plan.  The only game plan that could work is box and move all night while piling up rounds.  Tire the older man early and punish the forty year old late to the delight of the Polish fans shocking everyone around the world.  It could work, it could happen.  One thing is certain.  Adamek will come to win.  He will not be happy to survive like a Kevin Johnson against Vitali or David Haye’s non-performance against Wlad.  Adamek is the warrior that will go for broke to realize his dream of being heavyweight champion.

But in the end I am going to have to go common sense and pick the champ.  I see Adamek doing well in the early rounds and maybe even being ahead at the halfway point.  But eventually even a well-conditioned athlete will start to wear slightly from constantly playing the running game that will be necessary to avoid Klitschko.  This will allow Vitali to take control of the late rounds.  I do not see a knockout because Adamek will be conditioned enough to avoid serious punishment and his chin/heart will never allow him to give in to punishment.  Klitschko wins by unanimous decision that is far closer than anyone expected.

Vitali Klitschko vs. Chris Arreola: I used this fight because while Arreola is bigger than Adamek it shows Klitschko’s game plan against a pursuing shorter opponent.

Tomasz Adamek vs. Michael Grant: I chose this as the preview fight for Adamek because this was his best test so far in the heavyweight division against a Klitschko size opponent.

Question, comment, agree, disagree, or anything at all, send it to gpurf3@hotmail.com