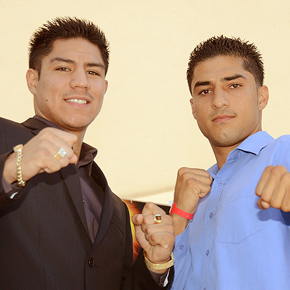 will be rewarded by a full night of what promise to be entertaining fights. Opening the show, and the only televised fight not for a world title, Jessie Vargas (16-0, 9 KOs) faces the stiffest test of his young career against Josesito Lopez (29-3, 17 KOs), who has over the past three years resurrected a career that looked to be headed for obscurity by winning seven straight fights, four of them by knockout.

Vargas is Floyd Mayweather’s charge, and it is that promotional and managerial tie that has him opening the undercard of a Mayweather PPV. Whether he can actually fight remains to be proven; on the one hand, he has those 16 wins without defeat or draw, but on the other hand, his only noteworthy win was against the ghost of the once-great Vivian Harris; for Harris it was his third straight knockout loss in the early rounds (in fact, Harris could not answer the bell to begin the second against Vargas).

Meanwhile, Josesito Lopez has picked up his three biggest wins against fringe prospects on ESPN2’s Friday Night Fights series. The national exposure has served him well, especially the power he showed in sending the previously-unbeaten Mike Dallas Jr. to a knockout finish in the seventh round of Lopez’s last fight in January of this year. Lopez was to fight Steve Chambers on FNF in May, but a severely bruised knuckle kept him on the shelf until this fight.

Vargas is the undefeated prospect; Lopez is the underdog with something to prove. Fans who tune in just as the pay-per-view hits air will see which man is destined for greater things in the lightweight division.