EXPECTATIONS: I don’t watch a great deal of television. I pick up certain shows on DVD and watch week-long marathons, and I tune in for boxing or The Daily Show. Other than that, I don’t really seem to tune in to anything on a regular basis. A few days ago, Paul Magno, our editor, e-mailed me and 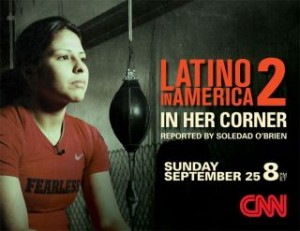 asked if I would review a documentary and I agreed. I received it in the mail a day or so later and popped it open. That is the extent of my previous knowledge of this program. CNN: Latino in America 2: In Her Corner. Right there on the disc. I didn’t know it was a television special, I didn’t know it was about women’s boxing (the disc has a picture of a woman on it) and it has a CNN logo.

So, being a biased individual, what can I say about it? It’s CNN, so as an informed KPCC member, I already am inclined to dislike it. It’s called “Latino in America 2”, so it’s a sequel or a second part in a series, and it’s not really about boxing. It has a woman on it and is called “In Her Corner” so it’s about women’s boxing. The prognosis isn’t very good.

REALITY: Do you ever sit down and watch something you have absolutely no informed opinion on and then stand back up an hour later wondering where the time went? I can thankfully say that I have as In Her Corner was actually pretty good.

The details first: This is apparently a documentary series that began in 2009. The correspondent, Soledad O’Brien, is a popular reporter on CNN. It clocks in around 43 minutes, which is average for hour-long commercial television. In Her Corner tells the story of 5 Time, US amateur featherweight boxing champion Marlen Esparza. 2012 will be the first year that female boxing will be featured in the Olympics and Esparza is first in line for the Olympic team.

Everything you need is here. There’s the well-spoken fighter from the tough neighborhood. The fighter works to train and trains to fight. Esparza walked into the gym at 11 looking to train. Rudy Silva, Esparza’s coach, refused. He won’t train female fighters. Esparza came back. Silva put her through the treatment. Pushing his classes harder and harder to teach her a lesson. The boys dropped out. Esparza remains.

Now she trains harder than ever. The Olympics. The Holy Grail. Esparza fights forward. Esparza fights pressure. Esparza fights Mexican. Esparza is a five time US Champion when the documentary begins. Exciting US fighters get robbed at the Olympics. We watch Esparza put her opponents through the treatment. Her arm is raised in victory nearly every time. Slick movers with point-scoring one-two’s give her problems.

But there’s something missing. The ingredients are there, but there’s nothing new. And perhaps that is the problem with the boxing story. Readers of The Boxing Tribune may find that this amazing story is just one among hundreds within the world of boxing. The true boxing fan may not be amazed by the story of the smart fighter on the way up because we’ve seen it. No, we’re interested in the fighting, because the stories within the ropes are what keep us coming back.

Unfortunately, the between-the-ropes action is lacking. There’s no tension. There’s no urgency. There’s no geography or rules established. The best parts are missing.

Case in point: Esparza fights through a round robin of other Olympic hopefuls. One fighter could stand in her way. Christina Cruz is boxing’s nightmare. She moves, defends, backpedals, jabs, fences. Her style pads points, gives fighters fits and frustrates fans. This should be a tense, nail-biting segment of the story. Instead it breezes by with barely a blink. It’s as if the camera operators and editors never quite knew what they were supposed to be showing. It plays like scenes with no context. The action of the fight is lost. They could have done well watching HBO and Showtime highlights narrated by Lampley and Bernstein to figure out what they should have been looking for. If there are any faults with this show, this is the worst.

But that isn’t to say that it kills it. Not at all, in fact. Because the viewer still gets a real-life, inspiring, underdog, boxing story, and we should all love that. Couple that with a decent introduction to amateur and women’s amateur boxing and you have a pretty good hour you won’t regret, and you won’t hear anything about the elections or taxes the entire time. So, what else could you ask from CNN?

All in all, there’s a lot of material there for a good television movie. We have a reluctant trainer taking the dedicated, young, female, Mexican-American fighter under his wing and teaching her to fight like a Mexican body-destroyer. We also have a rival fighter who fights exactly the way we professional fight fans hate to see, and the reason why we usually can’t stomach Olympic boxing. The problem is, when these two clash, there is something seriously missing. Still, the show is absolutely worth watching, especially on a Sunday when there’s nothing on to scratch your pugilist itch.