I’m back from a wonderfully merry and bright vacation in the lovely colonial city of Morelia, Michoacan. If you’ve never heard of Morelia, it’s your loss…It’s probably the last place in the world where being an American actually works in your favor.

In any case, contrary to my deep-seated narcissistic belief system, nothing has really changed without my presence at the helm of the self-created editor-in-chief position at The Boxing Tribune. Fights are still going on, fans are still getting jerked around, and the “Mean Girls” on Twitter are still obsessed with my every movement while simultaneously insisting that I’m irrelevant.

So, while trying to recover from the devastating agony of being called names on social media sites, here’s my take on a few issues that came up during my vacation:

The Last Word on Mayweather-Ortiz

What a quandary for the boxing media. What happens when the media’s two favorite targets go up against 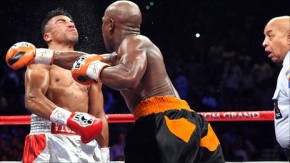 one another and the fight ends in a crazy controversy? If you only read some of these guys, you’d think that Mayweather and Golden Boy invented bad boxing behavior and cornered the market on shady boxing business. The scapegoat for all of boxing’s evils tends to be Mayweather, Mayweather advisor, Al Haymon, Golden Boy, or any combination of the three. But, happily, I have no idea what the usual suspects had to say about the whole Mayweather-Ortiz incident and I think I may just have lucked into the happiest moment of my little writing career. The world is so much clearer without all the pundits, self-proclaimed experts, and angrily twisted bloggers. Given enough distance from all the “experts,” common sense actually begins to creep back into the equation.

Really, think about it– all the convenient agendas and logic-bending, hand-picked attacks from guys whose own boxing credentials appear to begin and end with a cell phone full of contacts and an ability to play the “I’ll scratch your back” game when need be. Toss a roll of tape into a group of four or five of these boxing authorities and I doubt they could even figure out how to wrap a hand. Taking boxing analysis seriously from some of these guys is like taking health and beauty advice from me.

Fight fans should follow my lead and stay away from all these self-righteous blow-hards. All of them have their hands out to some extent or another and most are about as sincere as a Don King press conference. If necessary, even stay away from the opinion section of this same website. Go right to the facts and let your common sense as a fight fan take over. Or, at the very least, check out where the “expert” is coming from. Find out who pays his bills, how desperately he’s trying to network himself into “bigger and better” things, and what he stands to gain from taking the positions he takes. Of course, this takes the type of time and effort that most fans don’t care to spend. In that case, like I said, just stick to the facts and let all the experts talk to one another.

The one boxing story I couldn’t avoid on my vacation was the rumored pairing of Julio Cesar Chavez Jr. and Saul Alvarez. Everywhere I went people were talking about it and news reports were blaring about the possible match-up between the heir to the Mexican boxing empire and the young upstart who seems to have stolen the right to the throne from the unmotivated prince.

For those anxious to see this battle between 20-something boxing draws, don’t get your hopes up. This is the same routine that Bob Arum has been doing for years- using another fighter’s publicity to earn his own guy some free press with a well-crafted rumor, structured to manipulate the fans’ wishes and desires.

Arum was simply piggy-backing on Alvarez’s recent publicity for beating Alfonso Gomez, trying to get some play for his fighter, who, if you believe odd press releases and blurred Twitter pics, got a boo-boo on his hand from a scrap with a ceiling fan. Chavez Jr. is a fighter, forged in comfort and coddled throughout his career, who is simply not interested in anything other than the easiest road to a buck. I’d bet a kilo of piping-hot carnitas that he could never even make the alleged 158 lb. catchweight for a Canelo bout. In other words, Chavez Jr.-Alvarez is pure fabrication.

It’s no different than every Mayweather fight being preceded or followed by mysterious rumors of Pacquiao vs. Mayweather getting closer. Traced back to the source, all of these rumors find their beginnings in the the bowels of Arum’s dark lair. It’s weird that the same experts mentioned above can’t ever seem to pick up on the ploy.

The Super Six will eventually crown the right fighter as top dog of the super middleweight division. It’s just that it’s going to end up taking well over two years before doing so.

Kudos have to go to Showtime and to all of the individual promoters involved in the tourney for holding things together, even through complications such as injuries and the loss of half of its participants.

When the final bout eventually takes place, it will be between the two most deserving 168-pounders and all of the side issues really won’t have too much of an impact on the outcome. Still, I hope any future tournaments stick to the single-elimination format. It makes things so much easier.

But don’t hold your breath for future tourney action. The only reason this one came off was because neither Top Rank nor Golden Boy had any of the division’s top fighters. Fans love tournaments, networks love tournaments…but they make little sense for the top promoters who, more often than not, stand to lose their meal tickets by actually booking their guys in real fights against top competition.