Last July, David Haye talked himself into what many believed to be the most important heavyweight fight in over a decade.

After tormenting both Klitschko brothers for years through verbal assaults and t-shirt tirades, the 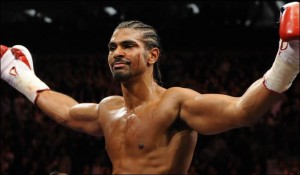 former cruiserweight champion of the world finally got one of them inside the ring . David Haye versus Wladimir Klitschko was what everybody wanted. The build up to the fight was tremendous.  The ring walks were pure artistic gold.  The arena was packed, and the crowd was in a fevered pitch. The entire world was watching.

Then the bell rang.

After slipping some early punches and wailing at the much larger champion early, the larger-than-life David Haye seemed to slowly grow smaller and smaller. His loud boasts about how the Klitschkos were robotic, mechanical messes where replaced with concern over being caught with even one sharp Klitschko jab. His claim of knocking out the the giant like a lumberjack takes out a tall tree was done in for losing round after round to the dominant champion.

David Haye was not the challenger fight fans were hoping for.

After the fight, when being interviewed by reporters, Haye unabashedly told all who would listen that he had broken his toe before the fight and that he didn’t tell anyone. He even went so far as to take off his shoe and hold his visibly crooked toe up to anyone and everyone who’d listen.

David Haye had talked a bigger game than a broken toe could explain. He knew there could be no real excuse. Not after the hype he created. Not after his monumental failure to back-up the most prolific trash talk since Muhammad Ali verbally assaulted Joe Frazier in the 1970s. David Haye had failed.

But then something interesting happened – something many would never expect someone in  Haye’s position to do. He took it in stride.  He laughed it off. He became a man of the people.

He re-tweeted toe puns on twitter from people that goaded him and posted some of his own. He owned the situation. He owned his failure to perform.

And now he’s coming back.

Speaking to Gareth Davies of The Telegraph, David Haye revealed recently that not only is he planning on shelving his self-imposed retirement date of October 13th, but that he’s going to target one of the Klitschko brothers for his next fight: Vitali.

You know Vitali Klitschko. He’s the scary one. And their would be no better way for David Haye to earn his redemption.

“So if I go out there and give 100 percent, I know I have a good chance of beating Vitali,” said Haye. “The only way I can prove that I can do what I said before I faced Wladimir, is go out there and redeem myself in my mind against Vitali. At 100 percent fit, you would see the real fighter I have in me out there.”

Sure, he withered in his biggest moment, but what if it really was because of his broken toe? Even if it wouldn’t have changed the outcome of the fight, wouldn’t a broken toe keep anyone from performing at the very best? And even if it was just an excuse, what other fight in the division right now is worth getting more excited about than seeing the brash talking David Haye in the ring with the Klitschko brother who doesn’t try to just win rounds but tries to put his opponent on the canvas?

For his part, Vitali Klitsckho has been open to the fight since it was proposed to him years ago, and that can only increase if Haye reverts back to the trash talking brilliance that put him on Klitschko’s radar in the first place. Once again, David Haye could talk himself into the biggest heavyweight fight that can be made. Once again the division would seem exciting. Once again the world would be watching.

Who knows? With ten healthy toes, maybe this time David Haye could actually walk the walk…

Kelsey McCarson has heard almost every David Haye toe pun imaginable. You can follow him on twitter @TheRealKelseyMc to tweet at him and prove him wrong about it.