Story and Photos by Gary Purfield 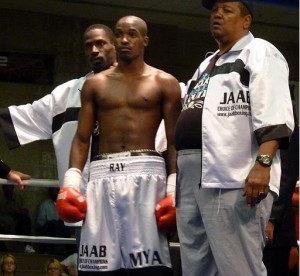 Guzman in a welterweight bout scheduled for eight.  Robinson was coming off a fourteen month layoff after he lost two consecutive decisions to top prospects Brad Solomon and Shawn Porter.  Robinson had no such difficulty tonight, easily disposing of Guzman by seventh round TKO.

What looked like a fairly competitive match on paper turned out to be a complete mismatch.  Robinson, from Philadelphia was far bigger than Reading PA’s Guzman who was out of shape (he came in at 151lbs for the weigh in Thursday and had to sweat down to 149, and then pay a penalty for the two extra pounds).  Robinson simply looked far bigger than Guzman whose best fighting weight is probably lightweight.  Guzman who is as tough as they come simply was out of his league in size and skill.

The southpaw Robinson started in the first round keeping distance with his jab and easily landing his left uppercut and straight left.  By the end of the first round Guzman’s eyes were swelling and his face was red marked.  This pattern continued and only got worse as the rounds went along.  Robinson landed at will while Guzman took his punishment.  If you could say one thing for Guzman it would be he won’t go quietly.  He would take big shots flush and scream at Robinson to keep coming.

By the end of round five the ringside doctor took a look and the corner convinced everyone to let him have one more round.  Again after round six Guzman was given one more round even though he was taking tons of punishment in a fight he had no prayer to win.  Then Robinson went after him with a series of unanswered punches in round seven and finally Steve Smoger put a halt to the beating.  The official ending was at 20 seconds of round seven.

Robinson 12-2 (5 KO) clearly had won every second of every round over the smaller and overmatched Guzman 7-13-2 (3 KO).  Robinson can hopefully now move past the two losses and layoff from the ring to get back to challenging opposition.  Guzman has taken a great deal of punishment in his career but likely will keep fighting on.  Guzman actually at one point when they debated stopping the fight in between rounds told his corner he would die in the ring.  Some fighters may have too much toughness and heart for their own good but he certainly cannot be accused of being anything other than a warrior. 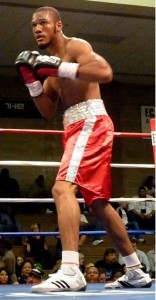 Young prospect Julian Williams engaged in what was by far the best action fight of the night winning a six round junior middle weight decision over Eberto Medina.  Williams 8-0-1 (4 KO) won by scores of 59-55 twice and 60-54.  While Williams clearly took the rounds Medina was game the whole way.

Williams repeatedly hit his man with heavy shots, especially the right uppercut, but Medina 5-7-1 (1 KO) just took the punches and fired back with shots of his own.  Finally at the end of the fifth round Williams drilled Medina with a straight right that actually stunned and staggered Medina but the bell rang stopping Williams from following up.   Medina came out fine in the sixth and the two finished their back and forth action.  When the final bell rang they received a standing ovation for their efforts.

Williams looks like one to watch.  He is long, tall, and fast for a 154 pounder with a good amateur background and a lot of skill.

In a close fight George Armenta took a split decision victory over Charles Hayward.  Armenta 14-7 (11 KO) was the visitor from Silver Springs MD but he would not be deterred by the hometown Philly fighter Hayward 7-3 (3 KO) and came out ahead by scores of 56-58, and 58-56 twice in his favor.  The bout was six rounds in the light heavyweight division.

DeCarlo Perez of Atlantic City NJ and Grayson Blake of State College PA put their undefeated records on the line against each other in a six round junior welterweight fight.  Both men had their moments in a back and forth affair that was technical but entertaining.  When the judges’ cards were read Grayson Blake 4-0 (1 KO) was awarded the unanimous decision by scores of 60-54, 59-55, and 60-54 that hardly reflected how close this fight was.  Perez 4-1-1 (2 KO) fought well and deserved a better shake from the ringside judges as the Boxing Tribune had the fight a draw at 57-57.

Chase Corbin 6-0 (5 KO) took only 28 seconds to dispose of Alexander Blanco who came from Casas Grandes Mexico for a short night.  Corbin, of Philadelphia landed a big left hook followed by a hard right uppercut flooring his opponent in the corner.  Blanco 1-1 tried to rise but fell over wobbling and could not get close to standing.  The bout was scheduled for four rounds at welterweight.

David Navarro of Philadelphia took on Chris Plebani of Bristol PA in four rounds of rough and bloody action in the welterweight division.  This was a rematch in a fight Plebani won earlier this year.  They split the first two rounds feeling each other out and then starting pounding away in round three.  Navarro opened up Plebani’s nose with a hard left hook that had Plebani bleeding profusely the rest of the fight.  Navarro had his man stunned in round four and ready to go but could not close the show.  Navarro 1-4 did take the decision and his first pro win by scores of 39-37 on all three cards.  Plebani drops to 1-2.

Korey Pritchett of Camden NJ took a unanimous decision win in his pro-debut over Korey Sloane of Philadelphia in four rounds of Jr. Welterweight action.  Sloane 1-2 was more active but could not land anything to slow Pritchett’s pursuit.  Meanwhile Pritchett 1-0 consistently landed heavy overhand rights that stunned his opponent and got the judge’s attention.  Pritchett won by scores of 39-37 twice and 40-36.

In the opening bout of the evening Todd Unthankmay 1-0 from Philadelphia and Ronnie Lawrence 0-1 of Pottstown PA made their pro-debuts in a four round light heavyweight bout.  Each landed hard punches but Unthankmay got the better of the action including a knockdown from a straight right in round three.  Lawrence won by scores of 39-36 on all three cards.