There was never any doubt about Kell Brook’s talent and potential. The only question was whether the gifted fighter 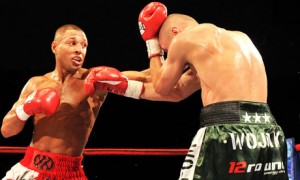 from Sheffield could compete on the world’s main stage and prove to be more Prince Naseem Hamed than Junior Witter.

Saturday at the Ponds Forge Arena in Sheffield, the 25-year-old UK welterweight won every second of his bout with Poland’s Rafal Jackiewicz (38-10-1, 19 KOs) en route to a quick, but defensible TKO 6 stoppage win.

Brook, now 25-0 with 17 KOs, didn’t really do anything spectacular over the course of the bout, he just dominated and lived up to his full potential as a mix of overwhelming talent filtered through a real professional’s mindset against, on that night, a legitimately tough opponent.

Jackiewicz, who reached his high-water mark as European welterweight champ as well as with wins over Delvin Rodriguez, Jackson Bonsu, and a 1-1 split with Jan Zaveck, is by no means an elite level fighter. Nonetheless, the former world title challenger was a legitimate Top 10 welterweight (#9 in The Boxing Tribune rankings prior to the bout) and had never been stopped in 48 previous bouts.

And Brook walked right through him.

The Welterweight division, at the moment, is not in the greatest of shape. Aside from the obvious Manny Pacquiao and Floyd Mayweather in the top two spots, there’s Victor Ortiz and Andre Berto right behind them. Other than that, the top 20 of the division is merely a collection of Euro-champs, re-treads, and three lone prospects– Mike Jones, Brad Solomon, and Kell Brook.

While Brook’s resume is still extremely slim, it is encouraging that his skills seem to be maturing just as his level of opposition is improving. The often sloppy, chin-up fighter of just two years ago is already showing vast signs of real seasoning from bouts with Michael Jennings, Lovemore Ndou, and now Jackiewicz.

Whether he can dominate the world remains to be seen, but with a shortage of real, bankable talent in the division, the rise of “Special K” should be fun to watch.