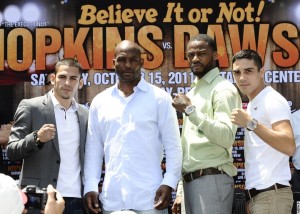 It’s almost mathematically impossible for Hopkins-Dawson to be anything other than a tactical chess match.

However, the match-up between the 46-year-old, age-defying master and his consensus top challenger is the fight to make at light heavyweight and the logical progression of events if fans are to consider boxing a real sport with a real narrative and championship structure.

One can’t argue too vehemently against #1 and #2 facing one another, especially when critics have been pushing for “The Executioner” to face “Bad” Chad ever since Hopkins invaded the 175 lb. division in 2007 with a win over Winky Wright.

However, charging 50+ bucks a pop for a bout guaranteed to not deliver much free-swinging action? Well, that’s another story.

Despite a solid undercard featuring two legitimately interesting bouts for the hardcore fight fan (Kendall Holt-Danny Garcia, Jorge Linares-Antonio DeMarco) and a Paulie Malignaggi squash against unknown Orlando Lora, Believe it or Not is not expected to break any pay-per-view records or capture the hearts and minds of the casual boxing fan.

Fans of real, professional prize fighting may find enough of interest to buy a ticket or call their local cable operator, but those fans may also be informed enough to understand the real potential for a main event dud.

In Part 1 of a 3-Part preview of the Believe it or Not event, The Boxing Tribune will take a look at the off-TV action:

This 10-round junior middleweight contest could easily have made the PPV telecast. Some would even say that it should’ve been featured over the Malignaggi-Lora bout.

Collazo, who wasted several prime years in the black hole of Don King Promotions, finally broke free and signed a deal with Golden Boy earlier this year. This will be the first bout in his new arrangement and his first solid match-up since nearly dethroning Andre Berto for the WBC welterweight title in January of 2009.

The lanky Hernandez, despite his one-round blow-out loss to Berto late last year, has received a reputation as a hard-working, blue collar fighter who makes up for a lack of skills with an aggressive mindset.

Southpaw former world titlist, Collazo is the class in this bout and should get the victory, but without one-punch knockout power and with a real eager opponent in front of him, fans should get some real bang for their buck.

Casal is an aggressive welterweight/junior welterweight fringe prospect with relatively heavy hands and a boatload of technical deficiencies. In other words, the 25-year-old Niagara Falls, NY native makes for an exciting fight, even in a losing effort.

Casal’s opponent, 30-year-old Michael Anderson is a complete unknown, with nobody of note on his resume.

Livingston is an entertaining middleweight who is still very much a work in progress– as evidenced by his recent draw with club fighter, Roberto Yong in August.

Colvin is also an entertaining middleweight with just as many defensive flaws as Livingston.

Expect fireworks and a KO loss for one of these 20-something fighters.

Don’t expect much from the last-minute opponent, but the 21-year-old Caballero is a legitimately talented super bantamweight prospect and interesting enough to watch– even against a human target.