Thursday, in a statement issued to the press, HBO announced the hiring of Showtime executive, Ken 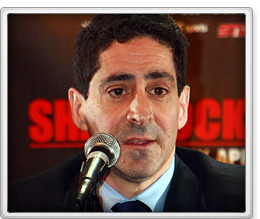 Hershman, to become the new head of HBO Sports.

Hershman, who has been in charge of Showtime Sports since 2003, will fill the vacancy created by the resignation of former HBO Sports head, Ross Greenburg, earlier in the year. He will also assume control of the troubled HBO Boxing division, which has suffered through a consistent ratings decline over the course of Greenburg’s tenure.

The former Showtime executive has long been regarded as a savvy boxing man and smart business executive. During his run as head of Showtime Boxing, the premium channel has stayed competitive against its significantly better-funded rival, HBO, through solid matchmaking, smart budgetary planning, and a willingness to think outside the box. Most notable is Hershman’s well-received Super Six World Boxing Classic, which suffered through several delays and detours due to injury and pull-outs, but will finally conclude on December 17 when finalists Andre Ward and Carl Froch meet in the ring.

Despite quality matchmaking and original concepts, though, Showtime’s boxing audience has flat-lined over the years and has not gained any ground on the much-maligned HBO product.

Hershman has also shown a willingness to use Showtime Sports funding to bring mixed martial arts programming to the network, as evidenced by his support of the Strike Force company, which has been a well-promoted feature of Showtime Sports since 2007. In contrast, HBO’s Greenburg had fought long and hard to keep MMA programming off the network.

The new head of HBO Sports, due to take full control of the division in January of 2012, will inherit an HBO Boxing product which has been widely criticized for poor budgetary discretion and questionable programming and matchmaking decisions.

As head of HBO Boxing, Hershman also becomes, arguably, the most powerful man in the sport. He will have to deal with a shrinking fan base and an American fight scene which has grown stagnant as part of the first generation of boxing completely removed from free TV.

The problems awaiting Hershman include how to improve ratings at a time when very few American fighters, outside of Floyd Mayweather Jr., can claim a discernible fan base and how to boost public awareness of a sport which has been reduced to niche status.