While the major card Saturday night will be the PPV Hopkins-Dawson bout, Top Rank Live will host a 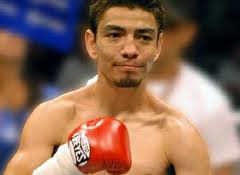 rematch from Los Mochis, Mexico televised on Fox Deportes.  At the top of the card is a twelve round rematch between interim WBA Bantamweight title holder Hugo Ruiz 28-1 (25 KO) and Francisco Arce 31-7-3.

Ruiz defeated Arce by unanimous decision in May of this year to retain his interim title.  Ruiz won the title in the previous fight against Alvaro Perez with a ninth round technical decision.  The first go round between these two produced an action packed fight with a controversial decision.  Now they will go again to settle the debate.

Adding to the excitement is that both fighters are from Los Mochis, Mexico where the fight is being held so the crowd should be large and lively rooting for their hometown fighters.  Each man will look to obtain a clear and convincing win this time around.

Ruiz is still relatively young at twenty five years of age.  His other notable win came against Jesus Vazquez in 2010.  The thirty-year-old Arce has some quality wins on his resume but came up short against his two most noteworthy opponents, Cristian Mijares and Giovanni Segura.  Arce fought to a close split decision with Mijares in 2010 and was knocked out in one round by Segura back in 2006.