Echo Arena, Liverpool, Merseyside, United Kingdom– There could be no greater indictment of boxing’s sanctioning bodies than to see WBO light heavyweight champion of the world and 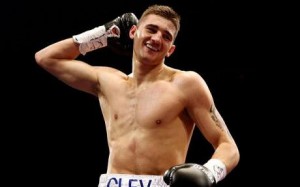 one of four recognized titlists, Nathan Cleverly (23-0, 11 KOs), engaged in a back and forth, life and death battle with limited club fighter, Tony Bellew (16-1, 10 KOs).

Cleverly would grab the majority decision Saturday over the hometown fighter, Bellew, with scores of 116-113, 117-112, and 114-114, but, with several close rounds, the decision could easily have gone the other way. The Boxing Tribune scored the bout 116-112 in favor of Cleverly.

The fight, itself, was entertaining and competitive throughout, with Bellew pushing forward and winning many of the inside exchanges while Cleverly would shine in the moments he could get outside and extend his long arms.

The knock on Cleverly has been a perceived lack of power and physical strength– and this was evident in this title defense as the Wales native lacked the strength to keep a limited and significantly less talented Bellew from pushing his way inside. One has to wonder how someone with more experience and punching power would do against the defending WBO titlist.

However, the 24-year-old Welsh belt holder won’t likely be tested at the elite level quite yet as talk of a Bellew rematch was in the post-fight air. If a return bout doesn’t get made, though, Cleverly has two softball challengers waiting at the #1 and #2 spots of the WBO 175 lb. rankings in Dmitry Sukhotsky and Braimah Kamoho.