According to a Golden Boy press release, Bernard Hopkins, following his controversial TKO 2 loss to 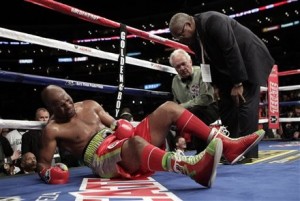 Chad Dawson late Saturday, has been released from the California Hospital Medical Center in Los Angeles where he was diagnosed with a “separation of the acromioclavicular (A-C) joint which connects the collar bone and shoulder blade.”

Hopkins was thrown to the canvas during his WBC light heavyweight title defense at The Staples Center and ruled unable to continue. Because no foul was indicated by referee Pat Russell, the official decision was issued as a TKO loss for the 46-year-old two-division champ.