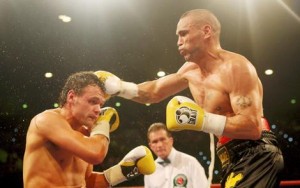 Wednesday in what is being billed as a WBA interim junior middleweight title fight at the Entertainment Centre in Newcastle, New South Wales, Australia.

The 36-year-old Mundine, who has only had two official bouts at the 154 lb. limit in his eleven year career (a TKO 10 win over Ryan Waters and a unanimous 12-round decision over Carlos Adan Jerez, both in 2010), was last seen stopping club fighter, Xavier Toliver, in a June TKO 7 victory. Mundine is also a former WBA super middleweight, holding the title from March, 2007 until vacating the strap in May of 2008 and making four successful title defenses.

Alvarez, older brother of “Canelo” Alvarez, is a former WBA interim junior middleweight who lost the belt in his last contest, via one-sided unanimous decision loss to Austin Trout in February of this year.

The WBA already has two recognized world titlist– “Super” Champion, Miguel Cotto, who is scheduled to defend his title against Antonio Margarito on December 3 and “Regular” champ, Austin Trout, who is currently in negotiations for his next defense.