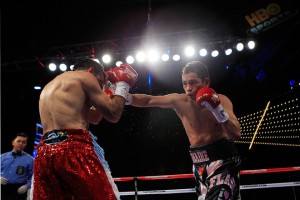 Narvaez went the distance with Nonito Donaire last Saturday.  Count me also among the many who found the dull way in which Narvaez went about surviving 36 minutes to be a surefire cure for insomnia.  Exactly why I had a problem with the Argentinians performance, however, may not be the same as the average boxing fan, who is often motivated more by bloodlust than a desire to see true competitive spirit.

To explain, I don’t have any problem with a defensive fighter.  If stinking the joint out is your best chance to win, I say by all means do your worst.  I understand the appeal among fans for every boxer to go out there and do their best Arturo Gatti impression, but that is quite simply not good strategy for the majority of fighters.  In fact, it wasn’t always the best strategy for Gatti himself, regardless of the adoration it won him.

What I do expect of a professional athlete in any sport however, is to do their best to try and win.  Narvaez (35-1-2, 19 KOs) did not seem to give a second thought to actually attempting to come out of the fight victorious.  After doing a decent job of landing a few jabs early in the fight, Narvaez felt Donaire’s power briefly in the 3rd round.  After that, he packed it in.

Some have given Narvaez credit for “defensive wizardry” which he honestly does not deserve.  It is one thing to hit and not be hit, as the great defensive fighters manage to do, but if forget the “hit” part, you are just hiding.  It is simply not all that difficult for an experienced professional to defend themselves if they absolutely refuse to open up and take any risks.

To add further insult to the frustrated fans in attendance and watching on HBO, Narvaez celebrated after the 12th round ended, and indignantly claimed he was not impressed by Donaire in his post-fight interview.  This was quite a strange claim to make considering he did everything short of dig a hole in the ring and crawl in it trying to prevent Donaire from stopping him.

Hopefully for his sake Narvaez made enough money off this fight to set up a nice nest egg for himself, because there is virtually no chance we will see him getting a payday on American television again.  As much as the bantamweight division has made great strides in recent years among the American audience, smaller fighters still face an uphill battle in receiving recognition in the Mecca of boxing.  The ones who have been able to break through on the premium cable networks (Donaire, Vic Darchinyan, Joseph Agbeko, to name a few) have done so by making up in effort what they lack in pure physicality.  A 5’3’’ man who weighs 118 pounds soaking wet and isn’t willing to throw punches simply has nothing to offer the average fight fan.

Donaire (27-1-0, 18 KOs) for his part attempted to engage Narvaez whenever possible, and won the fight by complete shutout.  However he had proper reason to be disappointed in his performance after the fight.  While most of the blame goes to Narvaez, it should be noted that Donaire is now being judged by the standards of the truly elite boxers in the world.  When someone of this level is in the ring with an unknown, fair or not, they need to look spectacular.  Compared to the last performance of fellow p4p candidate Sergio Martinez, who also was in with a man who did not feel much like throwing punches, Donaire’s work against Narvaez was inferior.  Martinez managed to eventually break his man down and stop him, Donaire did not.

Fair or not, this is the problem you face when you are considered one of the best in the world and you are up against fighter who is beneath you.  We all heard the groans over shutout decisions in fights like Mayweather-Baldomir and Pacquiao-Mosley, and if Donaire is to be mentioned in the same sentence with these future hall of famers, he will receive the same kind of criticism for any tiny amount of failure.

After all is said and done, Donaire’s profile was probably not hurt all that much considering that public perception rightfully places most of the blame on Narvaez.  A few more lackluster fights against no-name opposition however and Donaire might find himself receiving the same kind of criticism that Mayweather and Pacquiao themselves receive when they win a fight in less than spectacular fashion.

Two men discussed as potential future opponents for Donaire are Japan’s Toshiaki Nishioka and Mexican Jorge Arce.  Expect Top Rank’s match makers to go with Arce, who is much more likely to try and slug it out (73% of Arce’s career fights have ended inside schedule one way or another compared to 50% for Nishioka) giving Donaire a chance to look his normal explosive self.

Arce is also reasonably well known by American fight fans, having put on an excellent show on the Pacquiao-Mosley undercard.  Either way, these bouts may be simply killing time until we see Donaire in with another truly elite fighter in a match up where we can judge his greatness more accurately.