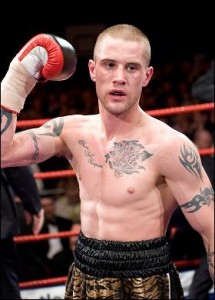 True to form, the hard-charging Katsidis came forward the entire bout, putting pressure on his opponent and digging shots to both the left and right side.

Burns, however, boxed smart and remained focused throughout the pressure. Using a sharp jab, effective movement, and a high-guard defense when bullied up against the ropes, the Scottish battler was able to keep one step ahead of Katsidis and stay out of any real danger.

In the co-feature, British super middleweight champ, George Groves (14-0, 11 KOs) stopped Paul Smith (31-3, 17 KOs) in the second round of their scheduled twelve.

After a fairly even first round, punctuated by a hard shot in the closing seconds by Smith, Groves came back in the second with a perfectly-timed right hand that sent his opponent down hard. Smith would beat the count, only to be sent to the canvas by another right hand seconds later. Smith managed to get to his feet again, but his unsteady legs prompted the referee to wave off the contest.